Another 36 people, including civilians and anti-government fighters, were killed when fighters struck an Ethiopian troop convoy in Mataban, 410km north of Mogadishu, the Somali capital.

“We buried 27 Somalis,” said Ismail Olad, a shopkeeper in Mataban. “We do not know the number of Ethiopians killed.”

Among the dead in an attack on Tuesday were Moalim Farhan, commander of the group that attacked the convoy, and Abdullahi Ali Farah, also known as Sheikh Aspro, the Reuters news agency reported a spokesman for the group as saying.

Aspro is deputy to Sheikh Hassan Dahir Aweys, the Islamic Courts Union leader who is on US and UN lists of people associated with al-Qaeda.

Clashes between the two sides have continued for over 18 months since the interim Somali government, backed by troops from neighbouring Ethiopia, ousted the Islamic Courts Union from Mogadishu and most of southern Somalia in 2007.

The latest violence comes a week before a UN-mediated ceasefire between anti-government fighters and the interim Somali government is due to take effect.

A Somali ship was hijacked on Sunday near El-Maan sea port, close to Mogadishu.

Three Germans are still held captive by Somali pirates in a forest near the Gulf of Aden in the northern Puntland region, while five Somalis working for an Italian aid agency, seized on Monday, are still in captivity.

Unicef, the UN children’s agency, has also warned action must be taken to avert possible famine in Somalia, where it said malnutrition rates are above 20 per cent. 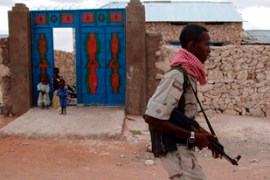