Cross-border US operations against Iran include seizing members of the Iranian Revolutionary Guards and taking them across the border to Iraq for interrogation, the report said.

But the scale and the scope of the operations in Iran, which include the CIA, have now been significantly expanded, the New Yorker said, citing current and former officials.

The operations also include providing support to armed Sunni Muslim groups opposed to the Iranian government, which is Shia.

Among groups inside Iran benefiting from US support is the Jundallah, also known as the Iranian People’s Resistance Movement, according to Robert Baer, a former CIA officer cited by the article.

Vali Nasr, an Iran analyst, told Hersh that the group was a vicious organisation suspected of links to al-Qaeda.

The article said US support for the dissident groups could prompt a violent crackdown by Iran, which could give the Bush administration a reason to intervene.

Ryan Crocker, the US amabassador to Iraq, told the CNN news channel that he had not read the article, but denied the allegations of cross-border operations.

“I’ll tell you flatly that US forces are not operating across the Iraqi border into Iran, in the south or anywhere else,” he said in an interview from Baghdad on Sunday.

Hersh has written previously about possible administration plans to go to war to stop Tehran from obtaining nuclear weapons.

An April 2006 article in the New Yorker that suggested “regime change” in Iran, whether by diplomatic or military means, was Bush’s ultimate goal.

Iran maintains that its nuclear activities are for peaceful energy purposes only.

Hersh told Al Jazeera that he believed the US was planning for a possible strike against Iran, something that was being pushed by Bush and Dick Cheney.

“The president and the vice-president truly believe that the Iranians have [nuclear]bombs or will have them soon, no matter what their own intelligence says.”

In December, a joint report by US intelligence agencies found that Iran was less determined to develop nuclear weapons than was previously thought.

Howeever Hersh said he thought that Bush and Cheney believed their policies would be safe in the hands of John McCain, the Republican presidential candidate. 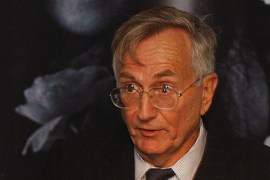