But in the army’s own account of the occupation, senior officers now concede their calculations were mistaken.

“The assumptions about the nature of the post-Saddam Iraq on which the transition was planned proved to be largely incorrect,” the report’s authors say.

Speaking to Al Jazeera, one of the report’s principal authors, Colonel David Reese of the US Combat Studies Centre, said there had been a series of failings.

“There were overly optimistic assumptions about how well Iraqi civil and local institutions of government would continue to function after Saddam was gone; and there was overoptimistic sense of how unified the Iraqi people would be when they had an opportunity to choose a new government,” he said.

The document is based on more than 200 interviews with participants in the invasion and occupation of Iraq, including the present chief of staff, General George Casey.

The study faults both military and political leaders for focussing excessively on toppling Saddam Hussein without enough consideration of the post-Saddam transition.

The Pentagon, it says, “did commit resources to the planning of post-invasion operations.”

But it adds: “In retrospect, however, the overall effort appears to have been disjointed and, at times, poorly co-ordinated, perhaps reflecting the department’s ambivalence towards nation-building.”

Among the flaws the report details is a lack of detailed pre-war plans to assume the duties of Saddam’s government, based on expectations that US civilian agencies would take on that task.

Then came the order from Paul Bremer, the US chief administrator, to disband the Iraqi army and strip Ba’ath party members of their government jobs.

That decision caught field commanders off guard and created a pool of disaffected Sunni Iraqis motivated to step up attacks on US-led occupation forces.

Moreover General Tommy Franks, the top US commander, kept insisting on an early downsizing of US ground forces to less than half the number proposed by Pentagon planners before the invasion.

The report says Franks’ decision to move to a slimmed-down, short-staffed headquarters shortly after the invasion of Iraq completely took senior colleagues by surprise.

He reportedly told his officers to be ready to cut back on forces in preparation for “an abbreviated period of stability operations”.

As a result Franks’ successor, General Ricardo Sanchez, found himself suffering from staff shortages and a poor transfer of responsibilities.

Speaking late last year Sanchez said he “saw first-hand the consequences of the administration’s failure to devise a strategy for victory in Iraq that employed in a coordinated manner the political, economic and military power of the United States.”

The army study echoes many of the complaints long voiced by critics of the Bush administration. 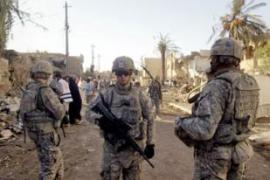 Iraq and US closer to military deal