The fourth postponement of a parliamentary session in which Lebanese politicians choose a new president has continued the stand-off between the US-supported majority and the Syrian-backed opposition.

A session due for Wednesday has been put back two days – hours before the mandate of Emile Lahoud, the current president, comes to an end.

With no agreement reached between the two sides on a presidential nominee which can then be voted into power in parliament, the people of Lebanon fear differences could be played out through violence.
One place where the sense of resignation is felt keenly is in the business district of Beirut. A “tent city” formed there by supporters of the Hezbollah-led opposition has paralysed businesses as well as the offices of Fouad Siniora, the prime minister, the blockade’s intended target.
“Trade here has dropped by 90 per cent since they set up the tents last November,” Fadia Matar, employee at a clothes store in the Downtown area, says.
Her colleague makes a point of correcting her: “I’d say 100 per cent. We have been wiped out.”
Methods questioned
Matar says she agrees that the March 14 majority should face opposition, but is resentful of the tent city.

“This is just not civilised behaviour. You can’t resolve differences like this,” she says.

“It has been a year now and nothing has changed … I am just an ordinary worker, and I am affected by what the opposition has done here,” she says.
Supporters of the March 8 opposition bloc, which features Hezbollah, one-time Shia rival Amal, and the secular Free Patriotic Movement, are in the camp.
It was set up after Hezbollah and other Shia parties pulled their ministers from Siniora’s cabinet in protest at not having enough representation to give them an effective veto on cabinet decisions.
After the March 14 movement refused to accept the demands by March 8 to grant them a veto, opposition MPs have boycotted parliamentary sessions to elect a new president.
The opposition believes that a “consensus” president is the only way to guarantee that March 14 does not possess total control of Lebanese politics.
However, despite a list of candidates being drawn up by Nasrallah Sfeir, the Maronite patriarch, for consideration by both sides, no agreement has been reached.
Situation abnormal
So for the time being, the tents will stay – and Downtown will remain deserted.
Most of those I spoke to in Downtown’s shops were not happy to give their names despite not being directly threatened by March 8 supporters, highlighting the tension in Beirut as the deadline for a new president draws near.

“They are not going to move until the presidential issue is solved,” said a cafe worker, who asked not to be identified.

“If they agree on a president – and God willing, they will – the tent city will be torn down by Hezbollah and we will blossom again.
“If not, we will have to sell up. We own five shops here and we have already closed four.”
Those in the tents at the entrance to Downtown’s shopping precinct are reluctant to even speak under anonymity, let alone be photographed.
One Hezbollah supporter who I asked to speak about his thoughts on the presidential vote said he could not speak to me without Hezbollah’s permission.
He suggested I speak to supporters in the camp of the Free Patriotic Movement, which is led by Michele Aoun, a Maronite Christian and March 8’s preferred candidate for the presidency.
On finding a tent full of FPM supporters, they pointed me back in the direction of Hezbollah’s “office” among the tents, asking me to check with them.
The March 8 movement’s supporters appear wary of saying anything controversial before the presidential issue is resolved, particularly as it relates to Hezbollah.
Stalwart support
Once full of people, the tents are now manned by a skeleton staff which comes when it can. They appear stoic in their acceptance that they must continue their sit-in and strangulate the centre of Lebanese political power, even for another year if required.
By maintaining their peaceful, yet highly effective, blockade of the Grand Serail, the opposition remains vociferous in its distaste for Siniora and the March 14 majority bloc to which he belongs.
Given that March 14 supports UN resolutions calling for Hezbollah’s disarmament, many ordinary Lebanese working in Downtown feel split between supporting the resistance against Israel and making a living, which the tent city is preventing.
“I do support the resistance against Israel. Hezbollah has protected Lebanon so many times before,” says Kamal Feghali, who works in two shops in the Downtown area.
“At the same time, this blockade is wrong. More than 80,000 people in workers’ families have been affected because shops can’t afford to keep their staff.
“If the presidential vote doesn’t work out, it will be far worse for us here and people won’t take it.”

Vote on Friday will be last chance to elect president and avert political crisis.

Talks with rival camps aimed at defusing tension over election of new president. 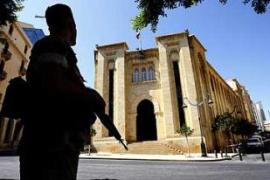