The contracts do not allow investments by the foreign companies in the oil sector but do pave the way for global energy giants to return to Iraq, 36-years after being told to leave by Saddam Hussein, Iraq’s former ruler.

The move is also seen as a first step to access the third largest proven crude oil reserves on the planet.

Jihad said the selected companies will have the first right  to develop the fields once competitive bidding comes after the nation’s long-delayed hydrocarbons law is passed by parliament.

Iraq wants to increase oil output by 500,000 barrels per day (bpd) from the current average production of 2.5 million bpd, equal to the amount being pumped before the US-led invasion in March 2003.

Exports of 2.11 million bpd currently form the bulk of the war-torn nation’s revenues.

The oil ministry is keen to raise capacity over the next five years to 4.5 million bpd.

Iraq’s crude reserves are estimated at about 115 billion barrels.

However, Iraq’s oil is lacking in infrastructure and the latest technology, because it was denied access under years of international sanctions after the 1991 Gulf War.

Iraq’s northern oil exports have been dealt a massive blow after a vital pipeline to Turkey was hit by its largest post-war attack, halting exports only days after Iraq had clinched its first term contract.

A UN-backed watchdog has reported weak controls over Iraqi oil riches under the US-led occupation, including use of the money for a no-bid Halliburton contract. 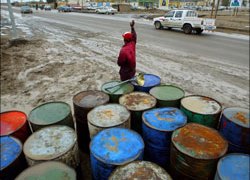 The latest Iraqi attempts to recover control of the country’s oil revenues from the United States appear to have hit a dead end with a special delegation being rebuffed in its bid to secure UN help.

Controversial US oil and services group Halliburton has said that its contracts in Iraq had helped boost its turnover by about 80% in the first three months of the year.