Despite the array of stars, the biggest cheers of the night were reserved for Mandela, who told the crowd that the 1988 concert had made a difference.

“Your voices carried across the water to inspire us in our prison cells far away,” he said. “We are honoured to be back in London for this wonderful celebration.

“But even as we celebrate, let us remind ourselves that our work is far from complete.”

Many of the people in the crowd appeared to be at the gig more to honour Mandela than to hear the music.

Clive Jones, a 31-year-old theatre technician, said: “I’m here because of the man. I feel he’s done so much for the world, especially with what was happening in South Africa. He is also humble and kind.”

Emmanuel Jal, a Sudanese hip-hop artist based in London who is singing on Friday, said Mandela was “unique” among African leaders.

“He did not love power so much, and left it and gave it to someone else.”

Jerry Dammers, who helped organise the 1988 concert and whose song “Free Nelson Mandela” became a banner for the anti-apartheid movement in Britain in the 1980s, took to the stage.

But one of the highlights was Winehouse, who is due to appear despite being diagnosed with a “touch of” the lung condition emphysema earlier this month.

The 24-year-old has fought drug addiction and her husband is awaiting sentencing for an attack on a pub landlord in 2006 and for conspiring to pervert the course of justice.

Hollywood actor Smith, who addressed a cheering crowd at the start of the event, said: “Peter Gabriel once said, ‘if the world could have one father the man who we could choose to be our father would be Nelson Mandela’

Mandela, South Africa’s first black president, officially retired from politics nine years ago but an important voice on political and social matters around the world.

During his stay in Britain, Mandela uttered a few words of criticism of Mugabe, but they made headline news.

In a speech at a dinner on Wednesday, he said that there had been a “tragic failure of leadership” in Zimbabwe.

As the celebrations continued in London, the US Congree voted to erase references in its national databases which labelled Mandela as a “terrorist”.

The African National Congress (ANC) was banned by South Africa’s apartheid government in the 1960s; its leaders were jailed or forced into exile until the ban was lifted 30 years later.

As a result of the ban, Mandela and other ANC leaders were added to the US’ terrorists watch list and had travel restrictions imposed on them.

“I am gratified that we were able to show our respect and high esteem for a man who is loved and admired around the world,” said Donald Payne, chairman of the sub-committee on Africa in the House of Representatives.

Condoleezza Rice, the Secretary of State, had described the restrictions as “embarrassing” and urged their removal.

Congress approved the changes when Senators voted unanimously to support the legislations, after the House of Representatives approved it in May.

Aids activists have slammed the European Union for leaving a worldwide scheme to fight the disease with a massive funding shortfall.

In the 10 years since Nelson Mandela led their country to democracy, many South Africans have begun to worry that their hero is becoming more of a commodity than a cultural icon. 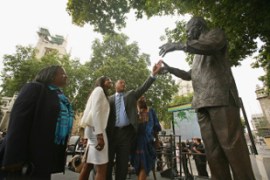