The agreement was supposed to halt all Palestinian attacks and Israeli military operations in and around the Gaza Strip and eventually ease an Israeli blockade of the impoverished territory.

Ismail Haniya, prime minister in the Hamas administration which controls the Gaza Strip, on Friday appealed to the various Palestinian factions to honour the truce for the good of the civilian population.

We expect everyone to respect the agreement,” he told reporters. “So that the Palestinian people achieve what they look for, an end to this suffering and breaking the siege.”

His plea came after Tzipi Livni, the Israeli foreign minister, on Thursday called for retaliation to attacks from the Gaza Strip.

“I am not interested who fired and who didn’t fire at Israel,” she said on Thursday. “It is a violation, and Israel needs to respond immediately, militarily, for every violation.”

On Thursday members of the Al-Aqsa Martyrs Brigades, an armed group linked to the Fatah party of the Palestinian president Mahmud Abbas, fired two rockets into the southern Israeli town of Sderot.

Following the attack Hamas issued a warning to armed groups to abide by the truce.

Mushir al-Masri, a Hamas spokesman, criticised the fighters who have launched mortars and rockets despite the truce.

“It has become clear that some Palestinian parties do not want this calm deal to succeed and they do not want the siege to be lifted,” he said.

“Those who fired the rockets did not aim them at the Zionist enemy but fired them to settle internal scores,” he said, in an apparent reference to the al-Aqsa Martyrs Brigades.

The group has denied carrying out Friday’s attack.

Israel kept its border crossings with the Gaza Strip closed on Friday, the third consecutive day that they have remained shut to traffic.

The opening of the goods crossing “would depend on the security situation,” he said.
The Erez passenger crossing, used by diplomats, journalists, and Gazans requiring medical care in Israel or abroad, also remained open.

An official from the European Union official has said that an estimated 600,000 litres of industrial fuel would be pumped through the Nahal Oz border terminal to Gaza’s power station.

This would be enough to keep the plant running for several days, he said.

The EU funds fuel deliveries to the power station.

Israel closed the border crossings after fighters launched rockets into Israel on Tuesday, but both sides have been trading accusations that the other has breached the truce.

The Islamic Jihad group claimed responsibility for the attack and said it was in retaliation for the Israeli army’s killing of one of its commanders in the occupied West Bank.

Since Hamas took power in Gaza in June 2007, Israel has sealed the enclave off from all but limited humanitarian aid, creating widespread fuel shortages and crippling the local economy in the impoverished territory of 1.5 million people. 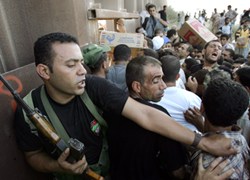 No control yet on Gaza-Egypt border

Egyptian and Palestinian police have fired warning shots in the air but failed to deter thousands of people from crossing the Gaza-Egypt border without identity or customs checks, officials said. 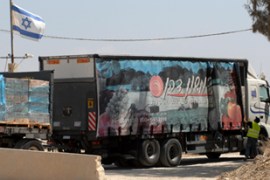 Uncertainty over the future of the ceasefire as borders remain closed to deliveries.