An order issued by the court said: “Nawaz Sharif is not a qualified candidate to contest a by-election.”

The court said Shahbaz could continue as chief minister until a final decision on his case was made.

The judges who gave the ruling were appointed by Pervez Musharraf, the Pakistani president, after he sacked dozens of judges under emergency rule.

“It’s a political decision and we reject it. It is a conspiracy against democracy,” Siddiqul Farouq, a spokesman for Sharif’s PML-N, said.

Sharif’s allies were angered by the verdict, with dozens chanting “Go Musharraf, go” outside the court and legislators walking out of the provincial assembly in protest.

At least 100 Sharif supporters burned tyres in the street.

The decision is a major political setback for Sharif, making it impossible for the Sharif, the leader of a junior party in the governing coalition, to become prime minister unless the ban on his candidacy is overturned.

Sharif was also barred from running in February elections because of convictions related to his ouster in a 1999 coup, which was left by Musharraf.

Earlier this month, the nation’s election commission effectively cleared him to run in by-elections after a tribunal set up to decide the matter failed to reach consensus. 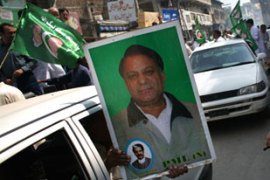