Soldiers and police continue to patrol areas of Tripoli to enforce a truce after fierce clashes between pro-government and opposition supporters.

Local residents who had fled returned to the densely-populated Tripoli  neighbourhoods of Bab al-Tebbaneh, Jabal Mohsen and Al-Qobbe but many shops remain closed.

At the meeting, Sleiman told religious leaders that “healing their wounds and repairing broken bridges” between Lebanese communities was their goal.

“The disagreements between the Lebanese today have reached the verge of suicide,” he said.

In a joint statement after the meeting, the religious leaders stressed the need for national unity, denouncing extremism and violence.

They also called on rival factions to refrain from using weapons or violence to achieve political gains.

They also called for a quick formation of a national unity cabinet.

The cabinet’s formation has been proving difficult due to long-running differences between the parliament majority and the opposition over the distribution of ministerial portfolios.

Sleiman was elected president as part of a peace deal signed in May to end a political stalemate in Lebanon that turned into street clashes.

The so-called “Doha pact”, signed in the Qatari captial, called for the formation of a 30-member cabinet in which the Hezbollah-led opposition will have veto power over government decisions. 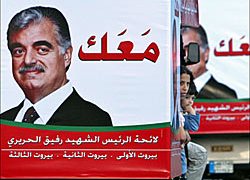 Lebanon’s Maronite bishops have called for the cloud of suspicion over President Emile Lahoud’s head to be lifted, after his chief bodyguard and three former security officials were arrested in connection with the murder of former premier Rafiq al-Hariri.