The area is a stronghold of Iraqi Shia leader Muqtada al-Sadr’s al-Mahdi Army and the blast took place as local elections were set to take place.

“We were to elect new members to replace some of our old colleagues from the movement of Muqtada al-Sadr who recently left the council,” a district council member said.

US officials and soldiers were at the district council office when the attack occurred.

The US military said in a statement: “[An] individual was caught by coalition forces fleeing the scene  and tested positive for explosive residue.”

The attack came a day after two American soldiers were killed and three wounded as they were leaving the council office of Madain town to the south of Baghdad.

The recent decrease in violence in Baghdad and other regions of Iraq has led to an increased presence of US soldiers on the streets which has also made them easier targets for attacks, especially in areas such as Sadr City where US troops fought raging battles earlier this year.

Hundreds of people were killed when Iraqi and US forces clashed with fighters from the Mahdi Army in Sadr City in March and April  before a truce was declared on May 10.

The latest deaths of US soldiers bring the overall losses of the military in Iraq since the March 2003 invasion to 4,106, according to an AFP tally based on independent website www.icasualties.org. 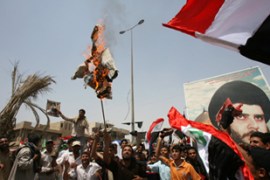 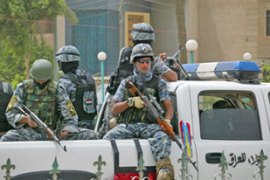 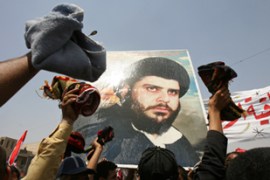 Iraqis rally over US security deal

Demonstrations follow call from al-Sadr against US military presence in the country.