The US military, which says it is only advising the Iraqi army in Amara, said Iraqi security forces had discovered 19 weapons caches since the operation began on Thursday.

One cache, found in a cemetery outside the city, contained more than 240 rocket-propelled grenades, about 250 mortar rounds, more than 675 anti-tank mines and several rocket launchers, it said in a statement.

Amara, a city of 350,000 people, has huge numbers of people living in abject poverty and has long served as a key centre for support of al-Sadr’s anti-US stance.

The government says the operation is aimed at rounding up wanted criminals and seizing weapons but many Sadrists have complained that they are unfairly being singled out.

Officials said that Rafa Abdul Jabbar, the Sadrist mayor, was detained with 16 other people on Thursday, and the crackdown reportedly continued on Friday with about 20 police officers and five other supporters of the Sadr movement taken into custody.

“Five officials from the provincial council who represent the Sadr movement have been arrested for aiding the militia,” Mehdi al-Asadi, police spokesman in Maysan province, told the AFP news agency.

Adnan al-Selawi, head of the Sadr movement’s office in Amara, on Friday accused security forces of insulting and harrassing civilians as well as carrying out random shootings and beatings.

He also said that billboards showing pictures of al-Sadr had been torn down while those for other religious groups had been allowed to remaining in place intact.

But despite what he called “clear provocation” Selawi said that members of the Sadr supporting Mehdi Army had been instructed not to respond with violence.

“If there is a violation, he must confront this with a smile,” he said.

Many residents of the city have, however, welcomed Baghdad’s efforts to improve security in a region which has allegedly become a centre for arms and oil smuggling.

“I think that the government’s attempts to establish security are good and it should help to bring more stability. But I’m worried too that more violence could follow,” a 39-year-old a tea shop manager, who asked not to be named for security reasons, told the AFP news agency. 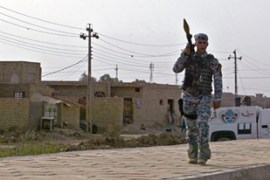