Xinhua did not say exactly what the “punishments” were, but added that another 116 people were in custody awaiting trial, and a total of 42 people had now been punished over the unrest.

Chinese authorities jailed 30 people in April for between three years and life for arson, robbery, “gathering to assault state organs” and other crimes following protests in Tibet.

Trily said a total of 1,315 people had been arrested or turned themselves in after the riots.

Peaceful protests that began on March 10 to mark the anniversary of a 1959 uprising against China’s rule of Tibet escalated into widespread violence across the city on March 14 before spilling over into other parts of China inhabited by Tibetans.

Amnesty International welcomed the news of the releases, which came a day after it urged China to reveal what happened to those detained.

“We are encouraged by the news of the release of 1,157 people and we look forward to receiving information about the trials of the 116 people in custody announced by the Tibetan authorities,” the group said in a statement.

Amnesty International had alleged in a report on Thursday that more than
1,000 people were still detained without charge in Tibet in the wake of the riots.

Jiang Yu, China’s foreign ministry spokeswoman, said the report had “not a shred of credibility”.

Chinese authorities say 19 people died in the anti-Chinese rioting which flared in the Tibetan capital Lhasa in March.

The speaker of the self-proclaimed Tibetan parliament-in-exile said on Friday that the Chinese security crackdown in response to the rioting had killed at least 209 anti-government protesters. 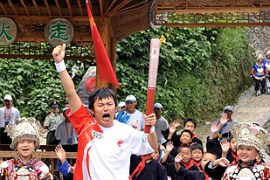 Olympic flame’s tour through Tibet is reduced to a single day through Lhasa.