The news comes a day after the South Korean president made a televised public apology over the row, in an effort to quell an increasingly angry electorate.

The protests were originally triggered by concerns that imported US beef could expose South Korean consumers to mad cow disease.

But in recent weeks the case has become a lightning rod for more widespread opposition to Lee’s rule.

In a statement released on Friday, South Korea’s foreign ministry said negotiators from the US and South Korea had “neared a result that can satisfy each other” after days of talks in Washington.

A spokesman said details of the agreement would be announced on Saturday after Kim Jong-hoon, the South Korean trade minister, had briefed the president and senior officials.

During Thursday’s televised apology Lee pledged to keep US beef out of South Korea unless Washington limits exports to younger cattle, considered less at risk for mad cow disease.

South Korea suspended imports of US beef after the first American case of mad cow disease appeared in December 2003, closing what had been the third-largest foreign market.

In his address Lee also apologised to the South Korean people over his decision to allow resumed imports of American beef, saying he thought it would help passage of a broader free-trade deal with the United States.

“I and the government are deeply sorry” he said, adding: “I should have paid attention to what people want.”

Lee took office in February after a landslide election win but has seen his popularity plummet over the beef issue. 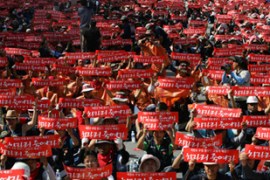 President apologises in TV address for ignoring public concerns over US beef.