More than a political campaign, Barack Obama’s presidential bid has become a popular phenomenon, a sometimes emotional outpouring the likes of which this country has not seen in decades.

Change, Obama says, “doesn’t happen from the top down, it happens from the bottom up”.

And Obama’s campaign is changing the face of US politics.

As the senator from Illinois moves closer to capturing the Democratic party nomination, we spent several days following him across Ohio and Texas, watching him give his stump speech, banter with his audiences, and shake hundreds of hands.

In more intimate town hall-style meetings, he took questions on a range of issues from jobs to welfare reform to US policy towards Africa.

At an early morning rally in the basketball arena of Ohio State University in Columbus, Ohio, I asked some of the people attending what attracts them to the candidate.

Lorrie Clark, who came to the rally with her three young children in tow, said Obama’s words move her.

Obama’s life story fascinates Robin Ferguson, who took a day off from work to go to the rally.

“He could have had any high-paying job in the world but he chose to represent the public,” Ferguson said.

She sees Obama as working on behalf of “the people still struggling, trying to get the American dream”.

At rallies like the one in Ohio and all across America, Obama has regularly drawn crowds numbering in the tens of thousands.

In San Marcos, Texas this week more than 15,000 – many of them Texas State University students – lined up to fill a campus park, waiting expectantly in the chilly February night.

Amid the sea of Obama signs, people in the excited crowd described a feeling of personal connection to the candidate.

“It’s almost as if he’s one of us, talking to us, that’s the reason why people can actually connect,” said student James Cole.

“He’s different,” said San Marcos resident Viviana Macias. “He doesn’t seem political – tainted – so maybe we can connect with him.”

Courtney Strange, president of the university’s Democratic Students Association, said Obama does not come off like a politician.

“It’s like he’s a friend, like a peer … to the people he talks to, someone they can relate to.”

Obama uses words and body language that signals to people that he is one of them, says James Pennebaker, the University of Texas psychology department chairman.

“Obama is interesting because he uses certain kinds of words like pronouns – words like I, me, my – in a way that really connects,” he said.

“It’s very personal. He talks about himself and how he feels and it’s a method that is a very powerful way of connecting with his audience.”

The connection was sizzling like a 10,000-volt wire at the San Marcos rally from the moment Obama bounded up on stage.

He had this audience in a state of almost rapturous excitement.

I watched one young woman smiling and nodding to herself and Obama intoned: “I want to be president so I can fulfill that role – so I can be a partner with you and help you achieve those dreams.”

After a frantic round of handshaking with onlookers, Obama left the event en route to his next campaign stop.

For Viviana Marcos, one of the ones who shook the senator’s hand, the experience evoked an intense, visceral response.

Obama has become, for many Americans, the mirror in which they see themselves and their country as they want to it be … a powerful force in American politics which is now on the move. 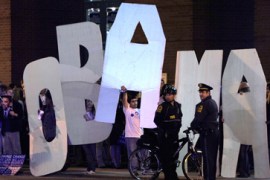 US election diary: The Obama factor

Al Jazeera’s Rob Reynolds on the Democratic battle for the presidential nomination.