Ban Ki-moon, the UN secretary-general, said the problem of sexual violence had “reached unspeakable and pandemic proportions in some societies attempting to recover from conflict”.

UN officials have said the problem is currently worst in eastern Congo but a survey of 2,000 women and girls in Liberia showed 75 per cent had been raped during the country’s civil war.

The UN meeting identified the former Yugoslavia, Darfur, Congo, Rwanda and Liberia as conflict areas where deliberate sexual violence had occurred on a massive scale.

The resolution also asked the secretary-general to submit a special report on the issue next year and tighten procedures for checking on abuses within the UN peacekeeping force following allegations in several countries.

Major General Patrick Cammaert, a former UN peacekeeping commander, said it has become “more dangerous to be a woman than a soldier in an armed conflict”.

Condoleezza Rice, the US secretary of state, who chaired part of the session, said the world now recognised sexual violence in conflict zones as “a security concern”.

“We affirm that sexual violence profoundly affects not only the health and safety of women but the economic and social stability of their nations.”

The resolution was passed after weeks of negotiations between council members and human rights and womens’ groups.

Diplomats said China and Russia had watered down some language in the resolution, including on sanctions.

Backers of the resolution said if the council defined sexual violence as a security matter it would give UN peacekeepers the high-level support they needed. 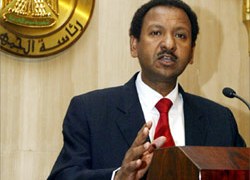 Sudan is to try 164 suspects, some of them government officials, for abuses including rape and murder in the war-wracked western region of Darfur.

Sudan has slammed a UN Security Council resolution to bring individuals suspected of war crimes in Darfur before an international court as a violation of national sovereignty.