That is still about 25 per cent less than in the US and about one-third of what UK motorists pay.

Fuel prices in China have doubled since 2003, but crude oil has more than quadrupled.

“This is very significant, a watershed move which suggests the Chinese government is prepared to risk unpopularity to curb the growth in domestic fuel demand,” John Kemp, commodities economist at RBS Sempra in London, said.

“We’ve already seen other Asian economies cut subsidies and the one big hold out, until now, was China.”

China accounts for around 40 per cent of the growth in global oil consumption to fuel its rapidly expanding economy.

Its growth has been seen as one of the main catalysts for oil’s surge from $20 a barrel six years ago to a record high of nearly $140 a barrel earlier this week.

William Hess, country manager for economic analysts Global Insight for China, said that the price rises may not affect demand in the short term.

“There are some structural factors at work here, I think, that could maintain a very high level of demand for gasoline and oil products in China,” he told Al Jazeera.

“Lately, there has been a supply constraint, particularly for diesel. There is still a lot of pent-up demand, even though prices have gone up considerably.

“If you look at vehicle demand there is a lot of spending power there. In the short term the impact [of the fuel price increases] could not be as much as in the long term.”

In an attempt to stave off resentment at the move, Beijing has promised support for lower-income groups such as farmers, fishermen and taxi drivers.

However, in Beijing and Shanghai motorists formed long queues at petrol stations late on Thursday to make purchases before the new prices came into effect.

Electricity prices will also be raised by about 0.36 US cents per kilowatt hour from July 1.

Urban and rural residents and the farming and fertiliser production sectors will be exempt from the increase, according to the National Development and Reform Commission, as will three provinces hit by last month’s earthquake.

The government hiked fuel prices by about 11 per cent in November but had kept them frozen at that level, seeking to avoid fuelling inflation.

But that policy led to retail shortages as domestic oil companies found themselves saddled with huge costs.

The high price of crude had even led some refiners to halt or suspend production, creating supply interruptions and long lines at some filling stations. 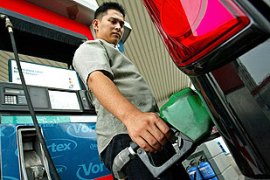 Fears over disruptions in supply see prices soaring to near $123 a barrel.