Youssef continued: “The UN Security Council has asked for both countries to withdraw their troops from this area.

“The Djiboutian government has withdrawn its forces up to 5km inside the Djiboutian land. But Eritrean forces have advanced.”

The Bab Al Mandab Strait is a strategic passage separating the Arabian Peninsula from East Africa. It is a key trade and oil route linking Europe to the east.

Eritrea denies its troops have crossed the border.

But Youssef showed Al Jazeera documents, pictures and maps that have been submitted to the UN.

According to him, these show the trenches dug by Eritrean troops on Djiboutian land.

Mahmoud Taha Towkal, a political analyst, said: “There is a new reality. Under recent developments, the Bab Al Mandeb Strait is no longer under the control of Djibouti and Yemen.

“It is now controlled by three countries: Djibouti, Eritrea and Yemen. It is no longer under the control of the Arab countries.”

Both the US and France have military bases in Djibouti. France also has a mutual defence accord with its former colony and supplies it with intelligence.

Observers say this may deter a widespread conflict. 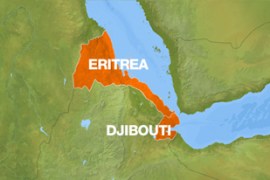