Condoleezza Rice, the US secretary of state, said on Thursday that the actions of the government have meant that the June 27 presidential election will not be free and fair.

“We have reached the point where broader, stronger international action is needed,” she said at a UN round-table meeting on Zimbabwe.

Morgan Tsvangirai, the MDC’s presidential candidate in those election, called the charges against Biti “frivolous”.

“I can only say that we sympathise with the man who was dragged into court.”

Biti is accused of writing documents which call Robert Mugabe, the current president, a criminal as well as provoking public violence and election rigging.

“The onus is on the accused to prove that he has no connection with the public violence that is happening in the country,” Florence Ziyambi, the prosecutor, said.

Biti was refused bail due to the seriousness of the charges, court papers said.

Hapious Zhou, Biti’s lawyer, said that the documents cited by the prosecution were forged, calling them “a photocopy of a photocopy”.

“There is not even an attempt to simulate the accused’s signature,” he said.

A court hearing on Friday will now decide whether the charges will thrown out.

Meanwhile, the MDC accused the ruling Zanu-PF party of being behind the killing of four of its supporters whose bodies were found in the southeast of Harare.

Nelson Chamisa, the MDC spokesman, said they had been beaten to death by Zanu-PF youth supporters.

“Now it’s about 70 we’ve lost,” he said, referring to the number of opposition supporters killed since the first round of the election on March 29.

Witnesses said that the four party activists were abducted in Chitungwiza and assaulted with iron bars, clubs and guns. They were reportedly forced onto lorries and taken away by militias chanting Zanu-PF slogans.

Paul Kagame, the Rwandan president, said that a free and fair run-off election was unlikely given the accusations of violence.

“It does not need a genius to understand that free and fair elections can be hard to contemplate in the current situation,” he said.

“There is a failure by African countries to support the process in Zimbabwe.”

Amnesty said on Thursday that 12 bodies had been found across the country recently and that most of the victims showed signs of torture. It  said that the victims appeared to have been abducted by Zanu-PF supporters.

However, Mugabe’s party has blamed the opposition for the violence. 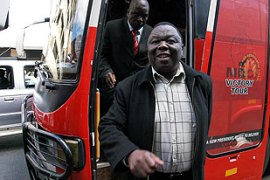 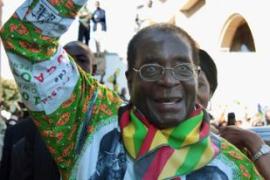 Opposition leader held for fifth time in 10 days as Mugabe pledges to keep hold on power. 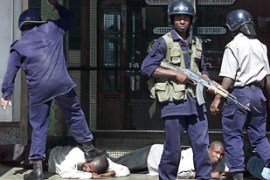 Mugabe warns of war if defeated