On the opening day of the trial on Wednesday, Mann said Thatcher’s role in the attempt to remove Teodoro Obiang Nguema, Equatorial Guinea’s president, went beyond raising finances.

Thatcher had been in contact with Severo Moto, a political opponent of Obiang who the plotters intended to install as president, Mann said.

Moto would be transported by Thatcher to the Spanish Canary Islands and then on to Mali in readiness to take over as Equatorial Guinea’s president, Mann said.

The Spanish government was completely ready to support the operation in Equatorial Guinea, a former Spanish colony, he said.

The US and unnamed oil companies also approved of a change of government in the country, he said.

South African secret services passed him a message from its chief, effectively giving him approval to stage a coup, Mann said.

“The Spanish government obviously denies these allegations, as it already did in 2004 through foreign minister Miguel Angel Moratinos,” he said.

Mann – who faces 30 years in jail if convicted – was arrested in 2004 at Harare airport with 61 alleged accomplices when their plane touched down on the way to Equatorial Guinea.

Zimbabwean authorities accused them of trying to pick up arms before launching their coup attempt.

Equatorial Guinea has issued an international arrest warrant for Thatcher.

Obiang has been in power in Equatorial Guinea since he overthrew his uncle, Francisco Macias Nguema, in 1979. 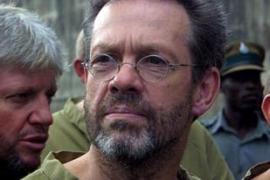 Court hearing of man accused of trying to bring down government begins in Malabo.

Ex-UK army officer to be tried in Equatorial Guinea for allegedly plotting a coup. 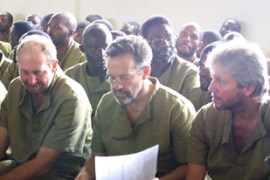