More than five days after a deadly cyclone hit Myanmar, vital aid is only just beginning to trickle in as aircraft loaded with much-needed supplies await clearance from the government to enter the country.

Paul Risley of the UN World Food Programme in Bangkok told Al Jazeera that relief flights carrying emergency food and shelter were ready to take-off for Myanmar as soon as they were given the green light.

Satellite photos:
Before and after

Video: Village at heart of disaster

“The government of Myanmar has assured us that they have granted overflight permission to these airplanes, yet the aircraft operators say they haven’t heard this word yet,” he said.

“In a time like this, every minute in every hour counts.”

He said that while reports indicated that one aircraft carrying high-energy biscuits had been given clearance, much more aid was urgently needed to prevent survivors from the cyclone succumbing to disease.

The warning comes after a senior US diplomat in Myanmar warned that the death toll from Cyclone Nargis could top 100,000.

As of early Thursday Myanmar‘s military government has said the confirmed death toll stood at 22,980 with more than 42,000 others missing.

With little or no aid reaching the survivors, fears of disease are rising every hour.

“Most people will be drinking bad water and we do have a clear and present danger of that leading on to very contagious diarrhoeal diseases,” Richard Bridle, deputy regional director of Unicef, the UN children’s fund, told Al Jazeera.

He said the top priority was to ensure an adequate and safe drinking water supply, but that essential specialist staff were yet to receive visas.

“We badly need to get specialist staff into the country and we would appeal to the authorities in Myanmar to make that entry a lot easier,” he said.

“The Myanmar government have asked for help from the United Nations – we are ready to give that help, we do have staff on the ground, but we need to get specialised staff in now.”

Criticism of the Myanmar government’s handling of the crisis has been growing both inside and outside the country.

Human rights group Amnesty International has said some donors were delaying aid for fear it would be siphoned off to Myanmar military.

“We will not just bring our supplies to an airport, dump it and take off,” he said.

“This is one reason why there is a hold up now, because we are going to bring in not just supplies but a lot of capacity to go with them to make sure the supplies get to the people.”

Al Jazeera correspondents in Myanmar say that despite reports on state television showing soldiers and senior generals handing out relief supplies, there has been little indication of government efforts to help survivors.

There have also been reports of violence in some areas as increasingly desperate survivors clash over what little food and clean water is available.

In the worst-hit regions of the Irrawaddy delta, entire villages were said to be still submerged under storm water with bloated corpses of human and animal victims adding to fears of disease outbreaks.

With an estimated 5,000 square kilometres still under water, disaster assessment teams say many of the most needy areas are accessible only by boat, with helicopters with relief supplies unable to find dry spots to land.

“Basically the entire lower delta region is under water,” Richard Horsey, the Thailand-based spokesman for the UN Office for the Coordination of Humanitarian Aid, said.

On Wednesday Shari Villarosa, the most senior US diplomat in Yangon, said the number of dead could eventually exceed 100,000 because safe food and water were scarce and unsanitary conditions widespread. 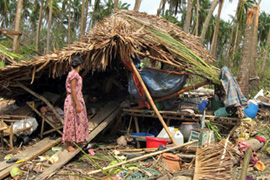 United Nations: Will release a minimum of $10m, launching a “flash appeal” to raise much more money.

Japan: $267,570 worth of emergency aid in tents, power generators and other supplies.

(All figures in US$)