Voters chose members of a 47-seat national assembly, or lower house of the parliament, in Monday’s election, which was declared a national holiday.

Bhutan‘s transformation towards a democratic constitutional monarchy was started by the Jigme Singye Wangchuck, the former king of Bhutan.

He handed over daily administration to a council of ministers in 2001, before stepping down in December 2006.

Reporting from Bhutan‘s capital, Thimpu, Al Jazeera correspondent Tony Birtley said that despite the royal seal of approval, many Bhutanese were not enthusiastic about democracy.

“People here don’t want democracy. They are happy with the monarchy,” he said.

The introduction of democracy is designed to ensure the continued popularity of Bhutanese monarchy and avoid a repeat of unrest that shook the nearby kingdom of Nepal two years ago.

A popular revolt in Nepal in April 2006 forced King Gyanendra from power and stripped away his wide-ranging regal powers.

After the election, Bhutan‘s 28-year-old, Oxford-educated monarch will remain head of state and the two political parties standing have stuck closely to the king’s vision.

Both the People’s Democratic Party (PDP) and the Druk Phuensum Tshogpa (DPT) fielded candidates that served as prime ministers under royal rule.

The PDP’s main election slogan was for the “well-being of everyone”, while the DPT said it was committed to “growth with equity and justice”.

The isolated kingdom has remained wary of embracing the consumerist trappings of the modern world, only allowing the entry of the internet and television in 1999.

Mock polls held last year to familiarise voters with the process had elicited a tepid response.

“The political parties have put immense pressure on people to vote. So they will turn up in huge numbers,” said chief election commissioner Kunzang Wangdi. 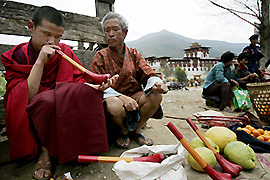 Bhutan has maintained a traditional
way of life for centuries [AFP]

People could only cast their vote in their home towns so thousands took leave to go to their remote villages.

Kuldip Nayar, an Indian political commentator on South Asian affairs, said the vote signalled only a limited move towards democracy.

“The feeling is that Bhutan is going to stay a monarchy in the garb of democracy,” he said.

“There are thousands of Bhutanese outside Bhutan who have not been allowed to come in. They are in Nepal, they are in India.

“The electoral rolls have [also] bee very selective. It is, you could say, a move from a monarchy to a very limited democracy.”

The results of the vote are expected on Tuesday morning. 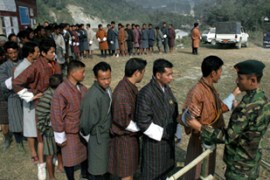 Himalayan kingdom to elect National Assembly and do away with monarchy. 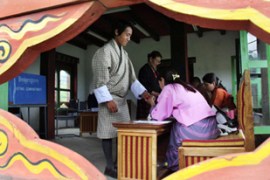 Election is key step towards ending century of absolute monarchy.