Tens of thousands of protesters across the world have taken part in a day of protests demanding the withdrawal of US and British troops from Iraq and Afghanistan.

The World Against War action was organised to mark the fifth anniversary of the US-led invasion of Iraq on March 20.

In London, police said that 10,000 activists had rallied at Trafalgar Square before marching the short distance to parliament. Organisers said that between 30,000 and 40,000 people had gathered.

A spokesman for The Stop The War coalition said that five years after the invasion of Iraq, military action had only managed to make the world “a much more dangerous place”.

“Estimates suggest as many as one million people have died violent deaths as a result of the occupation of Iraq,” Paul Collins said.

He said that Gordon Brown, Britain’s prime minister, was sending more troops to Afghanistan and claimed “this hidden war is fast becoming a disaster mirroring Iraq”.

Demonstrators outside parliament waved placards which said “Troops out of Iraq and Afghanistan”, “Don’t attack Iran” and “Freedom for Palestine”.

Caroline Lucas, the Green Party’s member of the European Parliament, called for Tony Blair, the former British prime minister, and Gordon Brown to be prosecuted for war crimes.

“They need to know you cannot bomb your way to peace,” she said.

Tony Benn, a former Labour Party minister, said that Britain’s involvement in Iraq, where the country has 4,100 troops, and Afghanistan, where it has 7,800, had caused “devastation”.

“In Iraq, there is clear evidence we are making steady progress, particularly in terms of security,” a spokesman said.

“In Afghanistan, Nato forces are winning the struggle against the Taliban.”

Elsewhere in Europe, around 500 people opposed to the US presence in Iraq marched through Stockholm city centre in freezing  rain carrying banners with messages including “Yankees Go Home” and “Five years of war, one million dead.”

“I’m here because I think it is extremely important to demonstrate against American policy in Iraq, especially now that the media is focusing less on the tragedy there,” Leif Staalhammer, a 67-year-old actor, said.

In Los Angeles, organisers said that up to 10,000 people took to the streets of Hollywood, many carrying banners denouncing George Bush, the US president, and calling for an end to the conflict.

Police said that around 2,000 protesters had turned out for the rally.

Ron Kovic, a Vietnam war veteran whose book Born on the Fourth of July was turned into a film with Tom Cruise, joined the march down Hollywood Boulevard in his wheelchair.

Shot and paralysed in Vietnam 40 years ago, Kovic told the AFP news agency that he felt “sorrow” and “anguish” for the Iraqi people and for the US troops “who are suffering, who are losing their arms and legs, who are being killed”.

“But I feel more than anything, when I see what’s going on in Iraq, I feel determined, determined to fight with everything within  us to stop this madness,” he said.

The march ended on Sunset Boulevard where organisers said that they hoped several California politicians and actors would join the  demonstrators.

“We’ve been in the war for five years, right now we’re about to be in a recession, and trillions of our dollars are going to a war we don’t want to be in,” one protestor told the crowd.

“Afghanistan is worse off because of the military occupation and Canadians are more opposed to the war than ever before,” she said. 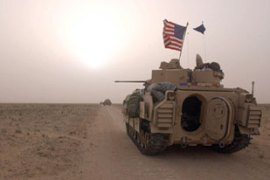 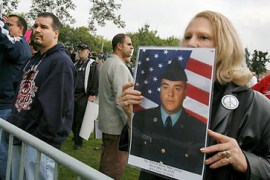 American voices on the war

Al Jazeera guages the mood in the US towards the war in Iraq five years on. 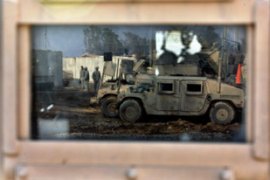 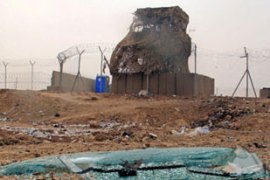 Iraq death toll ‘over one million’