Adding fuel to the reaction was the CIA’s admission only a week ago that waterboarding, a form of simulated drowning widely denounced as torture, was used nearly five years ago in interrogations of Mohammed.

In announcing the charges on Monday, Brigadier General Thomas Hartmann said the military judge hearing the cases will determine whether the evidence presented is admissible.

“There will be no secret trials,” Hartmann said.

“These charges allege a long-term, highly sophisticated, organised plan by al-Qaeda to attack the US,” Hartmann said.

In a transcript released by the Pentagon last year, Mohammed was quoted as saying he planned the attacks in New York and Washington in 2001 and others.

Last week the US admitted it had used the controversial waterboarding interrogation method to extract Mohammed’s confession.

The procedure is widely considered to be torture and human rights groups have strongly condemned it.

The full charges against the six are conspiracy, murder in violation of the laws of war, attacking civilians, atacking civilian objects, intentionally causing serious bodily injury, destruction of property, terrorism, and material support for terrorism.

Opponents of the military commissions, who have long charged that they are tilted in favour of “war on terror” convictions, said the trials would not be credible.

“They are unlawful, unconstitutional, and a perversion of justice,” the Center for Constitutional Rights, a legal rights group that has represented some “war on terror” detainees, said of the military commission trials.

“Now the government is seeking to execute people based on this utterly unreliable and tainted evidence: it is difficult to imagine a more morally reprehensible system,” it said.

Human Rights Watch said the masterminds and planners of September 11 needed to be brought to justice, but not under a system that lacked credibility.

“Possibly putting someone to death based on evidence obtained through waterboarding, or after prolonged periods of sleep deprivation while being forced into painful stress positions, is not the answer,” Jennifer Daskal, a lawyer for Human Rights Watch, said.

Apart from Mohammed, the other men include Ramzi bin al-Shibh, who was captured in Pakistan in 2002.

The tribunals at the US military facility in Guantanamo Bay, Cuba, are the first US war tribunals since World War Two.

They were established after the attacks to try non-US captives whom the Bush administration considers “enemy combatants” not entitled to the legal protections granted to soldiers and civilians.

However, if convicted and sentenced to death, any execution could take years to carry out as the sentence would have to be examined by civilian appeals courts, the New York Times reported.

Hartmann said the trials would be “as completely open as possible” and that the defendants and their legal teams would even see the classified evidence against them.

Clive Stafford Smith, a human rights lawyer who has represented Guantanamo detainees, told Al Jazeera that neither military tribunals nor the death penalty should be considered in these cases.

“Mohammed has announced he wants to be a martyr and to execute him merely makes him a martyr and fulfills his wishes,” he said.

“I think the United States is going to loose an awful lot of support from its allies in the West who are very strongly opposed to the death penalty.”

Mohammed, a Pakistani national of Kuwaiti descent, was arrested in Pakistan in March 2003 and handed over to the United States.

He is alleged to have been the “Number Three” in the al-Qaeda network after Osama Bin Laden and Ayman Zawahiri.

Mohammed is reported to have also confessed to the 1993 bombing of New York‘s World Trade Centre, the bombing of a nightclub in Bali, Indonesia, and an attempt to down two American aeroplanes using shoe bombs.

The alleged al-Qaeda operations chief is also said to have confessed to the murder of US journalist Daniel Pearl in Pakistan in February 2002.
“I was responsible for the 9/11 operation from A to Z,” he was quoted in the Pentagon transcript as saying.
However, Mohammed’s reported confessions remain controversial after the US Central Intelligence Agency (CIA) said that he, along with two other al-Qaeda suspects, had been waterboarded, an interrogation “technique” which simulates drowning.
Almost 3,000 people died in the September 11 attacks, in which 19 hijackers crashed four planes into the World Trader Center in New York City, the Pentagon building in Washington DC and a field in the state of Pennsylvania.
Source : News Agencies 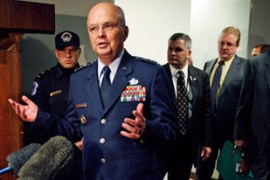 Waterboarding ‘may be illegal’

CIA chief says that the legal landscape has changed since technique first used. 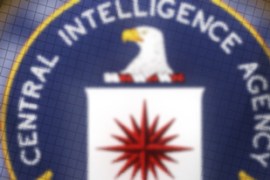