A number of Arab bloggers say they will continue to publish their messages online even as regional governments have started to aggressively restrict their activities.

Wael Abbas, an Egyptian online activist who uploaded YouTube video clips of two policemen torturing and sodomising a microbus driver in 2006, says the government is now pressuring bloggers in his country.

“The government is turning its eyes to us, forcing bloggers to shut down their blogs and harassing them,” he told Al Jazeera.

The YouTube torture videos sparked public outrage and led to a landmark case in which the two policemen were sentenced to five years in prison.

But Abbas says he has come under increasing pressure since the case.

“They know what I am doing online. I have received several phone calls in the past year in which I have been told to stop cooperating with human rights organisations,” he said.

Rania al-Malky, the chief editor of the independent Daily News Egypt and a researcher of Egyptian blogs, says Egyptian bloggers often expose issues like sexual harassment and torture “that were never addressed before.”

“Much of their [bloggers’] power is derived from the independent press who steadily reports on what is being said on the blogs,” she added.

But some analysts say bloggers sometimes cross the line, unaware of what is illegal under the law.

In February 2007, an Alexandria court sentenced 23-year-old blogger Kareem Amer to four years in prison for what his lawyer, Gamal Eid, called crossing “the red line”.

But Diaa Rashwan, a senior analyst at the Al-Ahram Centre for Strategic Studies, believes that Amer was prosecuted for his hate-speech style of writing.

“It was not due to the political colour of his blog or even the content. It was his style of writing, which was considered very harsh to the government, which got him sentenced,” Rashwan said.

“Amer’s problem is that he was unaware of the legal implications of his writings. He crossed the legal point without knowing what was to come.”

In April 2007, Abdel Moneim Mahmoud, a blogger and journalist affiliated with the banned Muslim Brotherhood, was charged with “belonging to a banned group” and for “defaming the government” with his reporting.

Rights groups claim Mahmoud’s arrest was a direct result of his activism but newspaper editor al-Malky says a distinction must be made between “human rights blogging” and political blogging.

She said: “The majority of arrested bloggers have been web activists with strong political affiliations and agendas.”

He was released a month later.

Jail time is not the only challenge bloggers face. In some countries, even posting content can be a problem.

Syria, for example, is taking a two-pronged approach – first blocking sites like the popular web community tool Facebook, which was banned in November, and then arresting some of the online activists who find a way around the censorship.

Blogs were inaccessible in June 2007 and YouTube was banned a month later.

Most recently, the Syrian online cultural forum jidar.net became inaccessible to users. According to Paris-based media watchdog Reporters Without Borders (RSF), the site was shut down in February after posting an article on the mukhabarat, the national intelligence service.

“The authorities are watching the Internet because they are scared that it will shape public opinion,” Mohamad al-Abdallah, a Syrian human rights activist, told Al Jazeera.

“During last year’s elections they closed the internet cafes in Damascus for three days. If you wanted to use the internet, you had to present an ID.”

The Syrian interior ministry says Biasi is to be tried in Syria on March 17 on charges of “undermining national sentiment” and “publishing false information” under articles 285 and 286 of the criminal code, which carry a maximum sentence of five years in prison.

Syrian blogger Ahed Al Hendi says blogging remains a ‘dangerous activity’ in Syria and that at least eight Syrian cyber dissidents were arrested in Syria in the past year.

But the Syrian government says it is protecting its national security against a spam campaign started by “Israelis who infiltrated the Syrian internet community.”

In November 2007, the ministry of telecommunications issued a statement saying that on Facebook and blogspot, certain groups were promoting “falsehoods and expressions that run counter to the ethics of speech and annoys others, which make them publicly committed crimes of defamation and [a] violation of public morals”.

Bloggers in Saudi Arabia have also started to complain of government harassment.

In December, Fouad al-Farhan, popularly known as ‘the dean’ of the Saudi blogging community and a strong advocate of democratic reform, was arrested in Jeddah.

The Saudi government said al-Farhan was arrested for violating the kingdom’s laws.

Major General Monsour al-Turki, an interior ministry spokesman, told AP that the blogger was being questioned but did not elaborate.

“You can say that this is the first actual arrest of a blogger in Saudi Arabia. It’s an unusual case. This country doesn’t have a history of jailing bloggers and journalists,” Ahmed Al-Omran, moderator of the popular web log Saudijeans, told Al Jazeera.

Meanwhile, Tunisian bloggers say they tread carefully to avoid the attention of what they call the country’s “cyber police”.

“I’ve had that happen to my blog. All internet connections are filtered by the Tunisian Internet Agency,” he said.

Sami Gharbia, the advocacy director of the Internet Censorship Division at Global Voices Online, told Al Jazeera that criticism of the Tunisian government has become taboo.

“Government-critical bloggers are harassed and their blogs are shut down. Tunisian mass media attacks the bloggers from time to time,” he said.

In December, Slim Boukhdir, a blogger and journalist known for his outspoken criticism of the Tunisian government and its president, was sentenced to one year in prison for “verbally assaulting a public employee while exercising his duty” and “breaching public decency”.

Despite the increased government monitoring, censorship and pressures, HRInfo director Eid insists that there is a future for Internet activism, but advises bloggers “to be creative for their own safety”.

“There are several tricks. Set up a proxy or a mirror site to your blog, participate in online forums,” he said.

“In Saudi Arabia, for example, bloggers are now using the comment sections of news websites as discussion forums, which is a much safer alternative to traditional blogging,” he added.

But bloggers must also avoid spreading rumours and unverified reports. Al-Malky says bloggers are required to adhere to the standards of professional journalism if they are to be considered credible.

“Bloggers must have the trust of the people if their blogs are to be perceived as real news mediums. Stick to the facts and write what you see,” she said.

“The minute you lose credibility as a blogger, you are finished.” 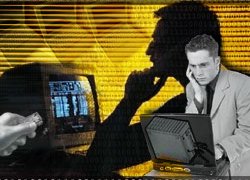 Internet blogs are giving rise to a new breed of Arab activist as ordinary residents increasingly use them to press for political rights and civil liberties in conservative Gulf states.

A blogger who has become one of Egypt’s most popular campaigners for democracy has been released after spending more than six weeks in detention.

A young Iraqi woman, who was one of the first to start a blog on conditions in the wake of the invasion and occupation of Iraq, tells Aljazeera.net how life has changed since the first bombs started falling and martial law was imposed.

The Bahraini moderator of an online discussion forum detained on charges of defaming King Hamad will appear before a prosecutor and then decide if he will go on hunger strike, his lawyer and a brother have said.