“To maintain operational security, we do not comment on indirect fire into the international ئzone,” she said.

The 10sq km Green Zone, located on the left bank of the Tigris river, which cuts through Baghdad, has often been targeted by mortars and rockets, although attacks have declined as security has improved in the capital.

Meanwhile, Mohammed al-Waely, the governor of Basra, said that he survived an assassination attempt two days ago carried by unknown gunmen in the centre of the city, in southern Iraq.

During a press conference al-Waely accused the Iranian consulate of masterminding the attempt on his life.

On Friday, Robert Gates, the US defence secretary, said he hopes to pull more troops out of Iraq after a July or August reassessment.

Speaking during a bilateral security review with Kevin Rudd, the Australian prime minister, in Australia, Gates said: “My hope still is that we will be able to further draw down our troops in Iraq over the course of the next 10 to 12 months.”

Under current plans, the Pentagon is withdrawing five of its 20 combat brigades – around 20,000 troops – from Iraq in mid-July.

Gates previously said he hoped to continue pulling about one brigade out per month through to the end of the year.

But since then, General David Petraeus, the senior US commander in Iraq, has recommended a pause in withdrawals to assess the security situation.

Gates said Petraeus convinced him that a pause would be appropriate.

“My hope would be that it would be a relatively brief period. But we will see in greater detail what General Petraeus has in mind when he brings his recommendations back to Washington and to the president next month,” Gates said. 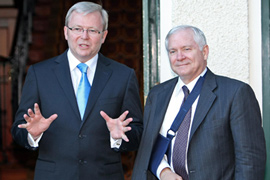 Both Rudd, left, and Gates, right, are looking to
pull troops out in the middle of the year [AFP]

Rudd’s centre-left government confirmed this week that it would honour an election pledge to pull 550 combat troops out of southern Iraq by the middle of the year.

Australia will still have about 1,000 military personnel in Iraq, including a 110-strong security detachment in Baghdad and personnel for aircraft and a warship based outside Iraq.

On Saturday, Australia also said it had no plans to add more troops to its force in Afghanistan, but reaffirmed its close security relations with the US.

“Above all it is clear we agree on the challenges we face together and the solutions we must forge together,” Gates said.

The two sides also discussed China, and shared views on developments in southeast Asia and the Pacific islands.