They have long demanded that Israel remove them as a way to build faith in recently renewed peace talks.

Israel maintains that the checkpoints are necessary to prevent suicide bombings, but on Wednesday the generals said they were excessive and that other measures could be used to prevent attacks.Barak, currently on a working visit to Turkey, was not immediately available for comment, and the Israeli army declined to comment.

Temporary alternative“The feeling of humiliation and the hate the roadblocks create increase the tendency of Palestinians to join militant groups and Hamas,” Shlomo Brom, a former chief of the army’s planning division who signed the letter, said.

As an alternative, Brom suggested using mobile army forces to set up temporary checkpoints when they receive concrete information of militant activity.

“We believe these alternatives are no worse than the movement restrictions” in preventing terror attacks, Ilan Paz, another signatory of the letter and a former head of the army’s administration of Palestinian civilian affairs, said.“You have to understand that there is damage in having the Palestinian people with its back to the wall, not seeing a light at the end of the tunnel, unable to improve their economy, unable to move from place to place,” Paz told Israel Radio.

“This creates a reality that creates terror, and we have to remember that.”

Key issueThe removal of the checkpoints is a key issue in the US-backed negotiations now under way between the sides, who have said they aim to reach a final peace agreement this year.

More than 550 roadblocks erected in the West Bank severely hamper the movement of people and goods and are prejudicial to the Palestinian economy, the United Nations and the World Bank have said.

Barriers were set up during the first Palestinian uprising in the late 1980s in order to hamper armed attacks on Israeli targets.

Since the second uprising in 2000, more and more roadblocks mushroomed throughout the territory.

Ehud Olmert, Israel’s prime minister, has repeatedly promised to reduce the number of roadblocks, but a recent UN report said the number last year rose from 528 to 563. 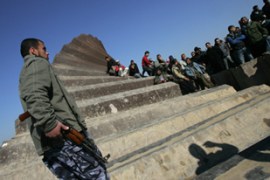