“As [US] President [George] Bush once said: no option is ruled out,” Olmert said.
Israeli officials have said Olmert planned to press for stronger international pressure on Iran at the United Nations, where a new sanctions resolution has been drafted.

Ayman Mohyeldin, Al Jazeera’s correspondent in Jerusalem, said that questions over Iran’s nuclear weapons capacity have always been something at the forefront of the Israeli political agenda.

“When the prime minister travels abroad, he takes with him whatever intelligence on Iran’s nuclear programme he has available to present their case.

“One Israeli official I spoke to said that he wanted to see the European Union taking more of a unilateral course of action.

“The EU and countries such as Germany have strong economic ties to Iran and he wanted to see the bilateral relations used to exert more influence over the Iranian government.

“Israel said they were speaking to many countries about this, and rather surprisingly, some countries in the Gulf, about their concerns over Iran’s nuclear programme.”

Also on Tuesday, Ehud Barak, the Israeli defence minister, said that a full-scale military campaign against Hamas in the Gaza Strip would not take place right away.
Barak was speaking to journalists aboard a flight taking him to Turkey.


Calls for a full-scale assault have been spurred in Israel by near-daily firing of rockets from Gaza.

“The military operations on Gaza continue day and night. They will also be stepped up very soon, but not for a few days.

“We will study the decision, remain calm and then act in order to stop Al-Qassam rockets,” he said.

“It won’t happen right away. There are reasons why we are not acting with full force right now. It will happen when the time is right,” he said.

On Sunday, Olmert ruled out a widespread ground offensive but warned that no one from Hamas was immune to Israeli strikes.

Meanwhile, Israel‘s housing ministry said preparations were under way to build up to 1,100 new homes in and around Arab East Jerusalem, which Palestinians see as capital of a future state.

The ministry said the municipality of Jerusalem was preparing tenders for 750 housing units in a northern area known as Pisgat Zeev, and possibly for an additional 370 units to the south.

The units in the south are earmarked for construction on confiscated Arab land in what is known to Israelis as Har Homa and to Palestinians as Jabal Abu Ghneim.

“We are building in Jerusalem everywhere within its municipal boundaries,” Zeev Boim, the Israeli housing minister, told Israel Radio.

An aide to Boim said tenders for the 370 additional units in Har Homa would only be issued pending the results of a previous tender for 307 units in the area. 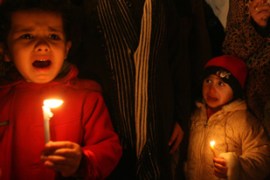 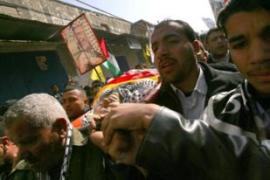