The ban on headscarves on university campuses has been enforced since a military coup in 1980.

The constitutional amendment, which was passed by 411 votes to 103 in parliament, says everyone has the right to equal treatment from state institutions and “no one can be deprived of [his or her] right to higher education”.

The move required a two-thirds majority to back it.

“The proposal to change the constitution has been approved. I hope this will be for the best for Turkey and hope it is done in a spirit of tolerance and reconciliation,” Koksal Toptan, parliamentary speaker, said after the vote.

Now the constitutional amendments are passed, the government plans to change laws governing higher education to specify what type of head covering will be allowed, to ensure that students do not attend classes in full-length chadors or burqas.

The AK Party of Recep Tayyip Erdogan, the prime minister, and the Nationalist Action Party have agreed that scarves should be tied loosely with a knot beneath the chin, leaving the face exposed.

The main opposition Republican People’s Party has said it would appeal to the constitutional court to have the decision overturned.

“This is a Black Revolution. The headscarf is a political symbol,” Canan Aritman, a  Republican politician, said.

“We will never allow our country to be dragged back into the dark ages.”

Saturday’s protest was called by more than 70 trade unions and non-governmental organisations and dubbed the “Rally for Secularism and Independence”.

Tuncay Ozkan, one of the organisers and a television network owner, accused the government of treason.

“I am warning them, changing the constitutional regime is a crime. They should be tried for treason,” he said. “We are here to defend the country.

Erdogan, who won 47 per cent of the votes in general elections last year, has strong public backing and insists that his party is loyal to the secular traditions.

The government says the measure is aimed at expanding democracy and freedoms to progress the country’s EU membership bid.
But secularists harbour deep suspicions about the real intentions of Erdogan – who had tried to criminalise adultery before being forced to step back by the EU.
Many secular women fear that allowing headscarves in universities will lead eventually to their being pressured to cover their bodies as well.
Source : News Agencies 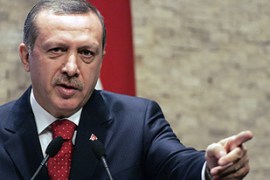 Woman would be allowed to wear headscarves in universities if measure is passed. 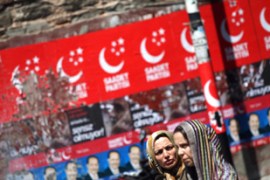 Deal between government and opposition party may see vote as early as next week.

Erdogan says ban can be lifted even before charter change, alarming secularists. 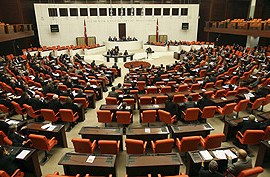