Captain Didier Drogba made it two in the 70th having been put through by Kalou, who netted his double in the space of nine minutes between the 73rd and 81st.

The Elephants, runners-up in the 2006 tournament in Egypt, were simply too strong for Guinea. Though they missed several clear chances, Gerard Gili’s side left no room for doubt about the outcome.

The game failed to live up to expectations until the 25th minute when Keita outpaced the defence to fire home with a low shot from the right that went in at the far post for his second goal of the tournament.

Ivory Coast stepped up a gear before halftime with Aruna Dindane and Kalou being denied in quick succession by keeper Kemoko Camara on 44 minutes.

Camara kept his team’s hopes alive when he leapt to turn away a curling Drogba shot that was heading for his top left corner on the stroke of halftime.

Guinea were centimetres short of an equaliser shortly after the hour when a Daouda Jabi free kick shaved Boubacar Barry’s right post.

Ivory Coast’s finishing let them down again when Dindane missed an open goal in the 67th minute.

However, Drogba showed the way two minutes later when he slotted the ball home after being set up by Kalou’s pass.

Drogba returned the favour four minutes later by setting up his Chelsea team mate, who walked the ball into the net after dribbling past Camara.

Kalou took his tournament tally to three with his second and Kone completed the rout.

Guinea were without defender Dianbobo Balde, who failed to recover in time from a thigh injury, and had to cope with the absence of suspended forward Pascal Feindouno. 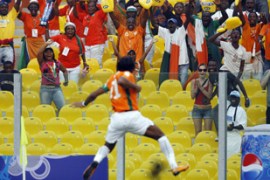 Ivory Coast top Group B while Nigeria go ahead of Mali to qualify for the quarters. 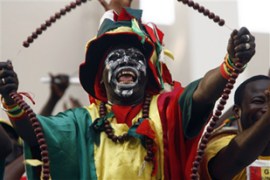 Africa Cup of Nations in video

Experience all the sights and sounds from the African Cup in video on Al Jazeera. 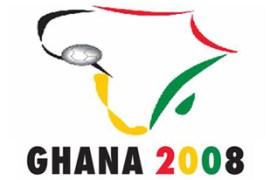