Home factories that use soya bean to make products such as tempeh, are
struggling to deal with the rising cost of the basic commodity

Indonesia is struggling with a potential food crisis, because of rapidly increasing prices of one of its staple food items.

The cost of soya bean has doubled on the world market in recent months, making imports of the commodity increasingly expensive.

The main cause of the price rise in Indonesia is shifting production in the US.

A US energy bill signed into law last September, encouraged a massive increase in the production of biofuels like ethanol.

Soya bean and corn, once used mostly for food, are now being converted into fuel.

That means soaring prices for Indonesia‘s “food of the poor”.

Take the case of Tukino. His family has been running a home factory for the last 34 years, making bean curd, one of Indonesia’s most popular dishes.

But never before has soya bean been so expensive.

The price has doubled during the past few weeks.

Analysts say this is because US farmers are replacing the crop in order to grow corn for biofuel instead.

Tukino says: “We are really suffering from this. We are sweating here everyday just to make ends meet.

“I am trying to run a business but if this situation continues a lot of people have to be laid off.”

Bean-curd factories like the one run by Tukino’s family went on strike for three days to protest against the price increase.

But after consumers began to complain, they decided to operate again.

Bean curd has kept many poor Indonesians healthy for a very long time.

It is very nutritious and it used to be very cheap, but now Indonesia’s favourite food is becoming very expensive and hard to get. And this is already creating unrest.

To calm down sentiments, bean curd and tempeh, another popular soya bean dish, are being sold again on the market, much to the relief of many Indonesians.

But while the price is still the same, the sellers have made the portions much smaller.

One resident of Jakarta said: “My children don’t want to eat anything when there is no tempeh or bean curd. They simply don’t feel well if I don’t serve it to them.

“Normally I could buy it at a food stall, but there hasn’t been enough in the market for quite a while.”

The Indonesian Farmers Union says the country should become self-sufficient again and start growing soya bean as it used to do in the past.

Henry Saragih, from the Indonesian Farmers Union, says: “This is a basic need which is now very hard to get. 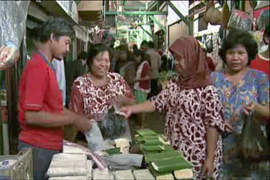 “This is not only turning in to a social crisis, but this could also cause hunger and malnutrition.”

The government admits that it should have worked harder to achieve self-sufficiency.

“But we should indeed have protected our farmers more. There is not a single country that doesn’t protect its own farmers. We should have been braver.”

For the time being the Indonesian government has decided to control the price of soya bean by asking the state food company to buy stock overseas.

This could prevent a deepening food crisis in the country for now.

Still, in the long term, other measures may have to be found.