On Sunday, the UN Office for the Co-ordination of Humanitarian Affairs (UNOCHA) gave a death toll of 50, a figure which Ribeiro said was overestimated.

In November, Mozambique had envisaged a heavy downpour during the current rainy season and declared a red alert on January 3 to warn its population, which has so far helped to reduce the number of victims.

More than 70,000 people have been resettled, particularly in schools and other public buildings.

The southern African country is gearing up to evacuate more than 200,000 people.

Kalay Maistry, Al Jazeera’s correspondent in a resettlement camp in Caia, says that malaria and water borne diseases are a concern.

“Food security is another [concern]. Many brought what they could – some maize and dried fish – but with much of their farms underwater nobody here is sure where they will be getting a meal from in the coming weeks.”

In Geneva, the International Federation of Red Cross and Red Crescent Societies (IFRC) warned that much of southern Africa faces potentially disastrous flooding, while the situation in Mozambique was particularly worrying.

Heavy rains that started in parts of Zimbabwe in December resulted in flooding, which was now spreading to Lesotho, Malawi, Mozambique, Swaziland and Zambia.

The large Indian Ocean island of Madagascar, off the Mozambican coast, has also been affected.

Peter Rees, head of the IFRC’s operations support department, said: “The weather forecast for the next seven days is not good with more rain expected, which could last until April.

“If this happens, southern Africa will certainly face major flooding with potentially catastrophic consequences,” he said.

Since November, the heavy downpour has led to a sharp rise in the Zambezi, Pongue, Buzi and Save rivers.

Mozambique has more recently been recovering from a cyclone that hit the country in February 2007.

The local Red Cross has sent emergency supplies to affected regions and the IFRC released one million Swiss francs ($980,000) to support the aid process on Friday. 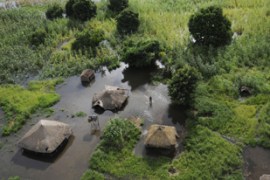 UN agency says floods could lead to outbreaks of cholera or diarrhoea.