George Bush, the US president, has described Iran as the “leading state sponsor of world terror” that must be confronted “before it’s too late”.

Speaking in Abu Dhabi on the fifth stop of his Middle East tour, the US president accused Tehran of undermining peace in Lebanon, sending arms to the Taliban, defying the UN and destabilising the entire Middle East.

“Iran is today the world’s leading state sponsor of terror. It sends hundreds of millions of dollars to extremists around the world while its own people face repression and economic hardship at home,” Bush said on Sunday.

“Iran’s actions threaten the security of nations everywhere, so the United States is strengthening our long-standing security commitments with our friends in the Gulf and rallying friends around the world to confront this danger before it is too late.”

The message was seen as seeking to find new ways to pressure Iran over its nuclear programme.

Bush’s administration has long alleged Tehran was developing nuclear weapons, despite a report last month by 16 US intelligence agencies saying they believed the programme had been stopped in 2003.

Manouchehr Mottaki, the Iranian foreign minister, said Bush had failed in his mission to the Middle East and said the American administration did not understand the politics of the region, especially in Lebanon.

“They do not have a real picture based on the realities of the region,” he told Al Jazeera.

“After Annapolis they allowed the Zionist regime to continue its aggression against the Palestinians, particularly in the Gaza Strip.”

Referring to Bush’s accusation that Iran was undermining the peace process in Lebanon, Mottaki said Tehran supported any initiative by international and regional organisations to solve the political deadlock.

However, he said the problems were an internal Lebanese matter and “nobody from abroad should try and impose their will”.

Sadegh Zibakalam, a professor of political science at Tehran University, said it was “unfortunate” to hear Bush’s comments.

He told Al Jazeera: “His visit is aimed at swaying Arab nations away from Iran and creating fear in the region.

“He is not saying anything new.”

Meanwhile, the International Atomic Energy Agency chief on Sunday said Iran had made conciliatory moves over its nuclear programme and agreed to answer all remaining questions about its past nuclear activities within four weeks.

A statement issued by Mohamed ElBaradei, the UN nuclear watchdog chief who met senior Iranian leaders last week, said Tehran had also turned over information about work to develop an advanced centrifuge able to enrich uranium much faster than the antiquated model it uses now.

Bush’s call for nations to rally against Iran drew little reaction in the Gulf.

James Bays, Al Jazeera’s correspondent in Abu Dhabi, said that there had been no reaction from the UAE government on Bush’s comments and that any discussion on Iran was likely to take place in private.

Officials from neighbouring US ally Saudi Arabia said the Arab state was looking forward to “peace and harmony” among the region’s countries.

Saud al-Faisal, the Saudi foreign minister, said Riyadh would listen carefully to any issues Bush might raise during his visit, but if the kingdom felt any Iranian threat, it would resort to dialogue with Tehran over confrontation.

Bush sought to appeal directly to Iranians saying they had a right to live under a government “that listens to your wishes”.

Bush’s attack on Iran was accompanied by praise of “democratisation efforts” in the Gulf and he had begun his speech by calling on Palestinians to reject “extremists”.

Although he did not mention Hamas by name, observers regarded his remarks as refering to the group currently in control of the Gaza Strip.

“This new era is being built with the understanding that power is a trust that must be exercised with the consent of the governed,” Bush said at the opulent Emirates Palace hotel. 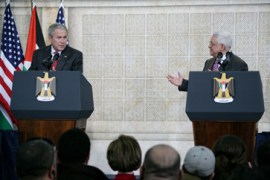 Inside the White House media bubble 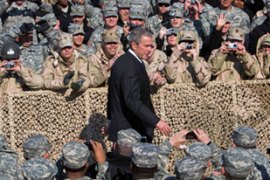 US president tells troops in Kuwait that Iraq withdrawal plans are on track. 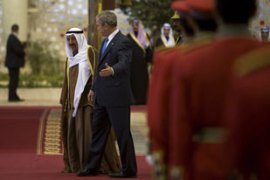 The US president arrives in Kuwait on the second leg of his Middle East tour. 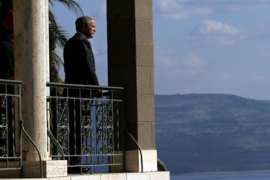 Al Jazeera examines if the US president was even-handed in the Middle East.