Siddiqul Farooq, a senior member of Sharif’s faction of the party, confirmed that the arrest warrants had been issued.

“We will adopt all legal methods to defend their rights,” he said.

Aftab Bajwa, a lawyer for one victim’s family, told the AFP news agency that a judge in the eastern city of Lahore had ordered that “Shahbaz Sharif should be arrested whichever airport he lands at”.

Pakistan’s government has refused to say what it plans to do if the Sharifs stick to their plan to fly to Islamabad on Monday and then stage a procession to their power base in Lahore.

“The government will decide on September 9,” Sheikh Rashid, a cabinet minister and close confidant of Pervez Musharraf, Pakistan’s president, said.

The Pakistan Muslim League said that 1,300 of its activists had been detained in recent days.

Officials were unable to confirm the figure.

“They can’t face their return. That’s why they’re fabricating cases and arresting our workers.”

Musharraf is under pressure in the run-up to a general election planned for the end of the year and has been discussing the possible return of Benazir Bhutto, another former prime minister.

Shahbaz tried to return in 2004 but was put on a flight straight back out of the country.

But that is unlikely to happen again after the supreme court ruled last month that both brothers had the right to come home.

Also on Friday, a court in Rawalpindi heard cases against Nawaz Sharif and his family brought by the government’s anti-corruption body, the National  Accountability Bureau (NAB).

Sharif was sentenced to life in prison for tax evasion and treason after Musharraf forced him from power in a bloodles coup in October 1999.

The latest cases, which were officially reopened last month, relate to an alleged default on a loan obtained by the Sharifs for a paper mill, as well as obtaining property and assets in a foundry beyond their declared means. 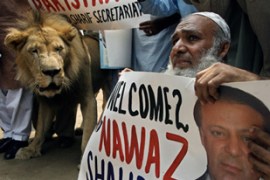 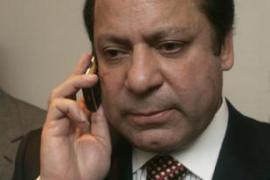 Nawaz Sharif’s lawyer argued that he had right to stay in Pakistan and contest poll. 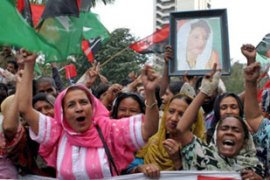