Reynaldo Francis, a local governor in Nicaragua, said on Friday: “We have at least 42 people dead.

“In Honduras and in our territory on the coast … more are appearing.”

Relatives sheltering in the port of Puerto Cabezas wept as soldiers in small boats carrying emergency food returned from tiny coastal villages and reported the inhabitants missing. Others rejoiced as boats brought bedraggled survivors to the port.

Ana Isolina Alvarado, an indigenous woman arriving from one of the tiny Cayos Miskitos islets in a fishing boat, said: “They told us a hurricane was coming and all the men and women were in their houses crying.”

She took refuge from the storm in the boat after it got trapped in nearby mangroves.

She told a local television channel that four of her family and dozens more from her village were missing.

Up to 25 bodies floated in the sea near the Nicaraguan border on Thursday, the Honduran civil protection agency said 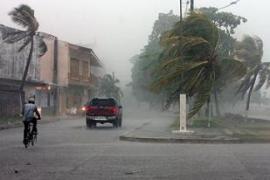