Moeller said the two leaders “agreed on the need for the earliest start for the  process” and “discussed other issues leading to a comprehensive settlement.”

However, Moeller did not say whether he was referring to reunification talks demanded by the Turkish Cypriots or twin-track talks on substantive and day-to-day issues agreed by the two leaders at their last meeting.

Diplomats had said they did not expect a major breakthrough from Wednesday’s talks because of Greek Cypriot elections in February and disputes over the direction of the peace talks.

The differences between Greece and Turkey have the potential to harm Turkey’s effort to become a member of the European Union (EU).

Turkey‘s entry hopes are complicated because Cyprus is already a member of the EU bloc, and as such it holds veto rights over Ankara.

Papadopoulos led Greek Cypriot rejection of a UN power-sharing plan in 2004 which the Turkish Cypriots accepted.

He is seeking re-election, and is slightly ahead of his two main contenders in opinion polls.

Cyprus is represented in the EU by its internationally recognised Greek Cypriot government, led by Papadopoulos. 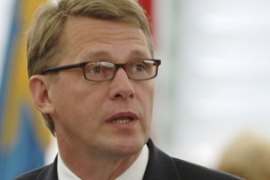 The Federation Internationale l’Automobile (FIA), has fined the organisers of the Turkish Grand Prix five million dollars after the leader of an unrecognised country was allowed to present the winner’s trophy at the end of this year’s race.

The prime minister of northern Cyprus has resigned, dissolving his two-party coalition government and sparking a political crisis in the process.