Officials could not confirm reports the suspects had been targeting Frankfurt international airport and a US military base in Ramstein.
But they said the men had scouted out sites frequented by Americans including discos, bars and airports.
“Altogether there were 40 raids in properties across Germany,” Tim Friend, Al Jazeera’s correspondent, reported.
Suspects identified
Prosecutors identified the three men as 28-year-olds Fritz G and Adem Y, and 21-year-old Daniel S.
The men belonged to a little-known al-Qaeda-affiliated Sunni Muslim group with roots in Uzbekistan called Islamic Jihad Union, officials said.
All three are believed to have trained in camps run by Muslim groups.

Angela Merkel, the German chancellor, said: “It shows that the terrorist threat here isn’t abstract. It’s real.”
The men were arrested on the same day that police in Denmark seized eight young Muslims they suspect of plotting a bomb attack.
The arrests also came exactly a week before the sixth anniversary of the September 11, 2001, hijacked aeroplane attacks on targets.
“The apparent motive is hatred of Americans,” said Joerg Ziercke, head of the federal police.
He said the explosives could have caused more damage than the bombings in Madrid and London which killed 191 and 52 people.
Rented house
Ziercke said the three men were seized at a rented holiday house in the Sauerland region of western Germany.
Between February and August 2007, he said, the suspects had filled 12 large vats with 730kg of a solution containing hydrogen peroxide – the explosive chemical used in the 2005 suicide bombings in London.

Ziercke said the suspects had probably been planning simultaneous car-bomb attacks in several locations across Germany.

Some 300 police had tracked the suspects since December, when one of them was observed scouting out US military barracks in the German city of Hanau, near Frankfurt.
On Tuesday, the police raided the house in Sauerland and other sites across Germany after local police unwittingly stopped the suspects for a routine traffic violation several days ago and they grew nervous, Ziercke said.
One suspect escaped out of a bathroom window but was detained after a scuffle with police in which a shot was fired.
Police said additional arrests were possible.
Source : News Agencies 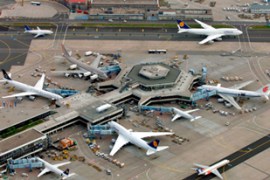 Three held for allegedly plotting attacks on Frankfurt airport and US military base. 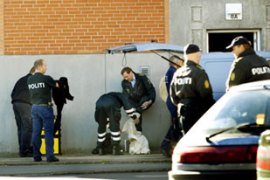