Of all the issues dominating the parliamentary elections in Morocco, few are as important to the kingdom’s international image as women’s rights and education and their role in politics.

As of now, the voice of Moroccan women is feeble both in politics and society, despite the achievements of a few individuals.

But even critics of the government admit that attempts are being made to set right gender injustices through legislation.

In the September election, at least 10 per cent of those elected will be women.

A system now ensures that 30 of the 325 seats in parliament are reserved for women.

The legal landscape for women really began to change after 2004.

Known as the Moudawana, the law has raised women’s minimum marrying age from 15 to 18, tightened rules regarding polygamy and granted both spouses the right to file for divorce.

The law is seen as one of the most progressive in the Arab world and an important advance in human rights in the sense that it placed families under joint responsibility of both spouses.

Separately, women have been given new responsibilities in mosques, principally in teaching.

Called the Murchidates, they will now instruct other women about Islam, answer questions relating to religion, provide legal guidance on family law, and help promote literacy.

Despite the reforms, rights activists say the new laws are failing to achieve their full potential as many women remain unaware of their existence.

These activists say true women’s emancipation will be achieved only if awareness campaigns are intensified, noting that coping with life’s daily burdens is itself a struggle for the vast majority of Moroccan women.

“In terms of women’s rights law, some progress has been made recently, especially concerning the Moudawana. But we believe that the new family law has failed to achieve full equality in rights between men and women,” Khadija Riyadi, president of the Moroccan Human Rights Association (MHRA), said.

“The promoters of the new law have ignored recommendations introduced by us and other women’s rights campaigners. Equality of rights remains an unfulfilled promise. There’s also a lot of work to do in terms of the new laws intended to protect women against all sorts of violence.”

Education is another challenge in Morocco. Despite impressive advances, there is still a lot of ground to be covered, particularly in the area of schooling for girls.

Women’s rights activists say the new laws will have little impact as long as they remain unenforced.

The intended beneficiaries lack the minimum education that would give them the confidence to ask for their rights.

Riyadi says: “It’s a fight against discrimination at all levels … And this discrimination is quite endemic when it comes to economic, social and cultural rights.

“Here I’m talking about the right of little girls to go to school and for all women to get a decent job if they want. Thus, as a human rights activist and as a woman, I still have a lot of issues to fight for.”

The challenges can hardly be overstated.

In rural regions, old customs persist, with girls still being married off below the legal age.

Most women’s lives remain bound by traditions that are thought to have rural and sometimes tribal roots. Furthermore, wives are beholden to their husbands for their livelihoods, putting them in a position of weakness that is vulnerable to abuse.

Riyadi says that for measuring improvements in women’s conditions, the MHRA uses universal human rights as the reference point, her primary goal being to make sure they are implemented in Morocco.

“We do not consider international laws dealing with human rights as a Western diktat. We consider them to be legislation for all humanity cutting across political boundaries, because those laws have been established by people from different countries around the world,” she says.

“I am talking about the principle of universality – the universality of women’s rights as stated in the international law, regardless of country, origin or religion.

Riyadi says the MHRA’s main task is to monitor the government’s compliance with the international laws they are formally committed to uphold.

“Of course, the level of implementation differs from country to another. In Europe, for instance, women’s conditions are by any measure far better than those of women in Africa.

“And then there are also different levels inside the Arab world. For instance, the family law in Tunisia is a landmark compared with the rest of the Arab countries.

“In Morocco, as I said before, some progress has been made. But the problem remains the compliance of the national laws with international laws.” 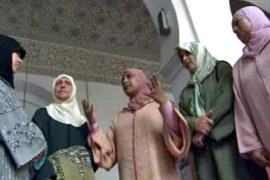 The women who defy convention and change opinions.