General Omar Torrijos, Panama’s leader, signed treaties regarding the canal’s future with Jimmy Carter, the then US president, in 1977.

It was agreed the US would hand the canal back to Panama by the end of the century.

Martin Torrijos, Panama’s current president and the son of General Torrijos, attended Monday’s ceremony in the village along with the former US president.

Carter stood by his decision to hand back the canal, saying that despite US global dominance, its leaders should always show respect to other countries.

He said: “Many leaders in the United States said that we should ignore Panama’s concerns and said that, if we accept, it would be a serious error and sign of weakness.”

The former president told Al Jazeera he considered the treaties the most notable diplomatic achievement in the western hemisphere during his lifetime.

He said they also provided a lesson for today on how the US should resolve differences through peaceful means.

On Sunday, a worker preparing the event was killed when his truck hit an electric pylon.

The death was a grim reminder of the bloody cost of the construction of the canal, during which 25,000 workers died.

Opened in 1914 at a cost of $375m, the canal was dynamited and dug out by thousands of labourers, braving malaria and yellow fever.

This first phase of the project will involve dry excavations of the 218m wide trench linking the Culebra Cut with the Pacific coast during which  47m cubic metres of earth and rock will be removed.

The tendering process for the $3bn-plus project to build a new set of locks is expected to start later this year. 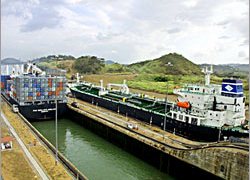