Bruce Golding, the JLP leader, who would become prime minister if his party wins, avoided an outright claim of victory in a speech to cheering supporters on Monday.
Close contest
Golding said: “However perplexing some may find the results, the fact is that the people have spoken and we of the Jamaica Labour Party, we accept and respect the decision.”

“At the moment, the Jamaica Labour Party commands a majority of seats in parliament.”

A recount could take three days.
Danville Walker, director of elections, said that workers would begin recounting ballots on Tuesday and the process could take two to three days.

He said that there were about three constituencies that were “closer than razor thin”.

Simpson Miller said that there are voting irregularities, in which PNP candidates could file legal challenges.

Rigging allegations
Simpson Miller said: “In some constituencies people were barred from exercising their right to vote.”

“Rules were being broken. When we should not be campaigning, people were out there campaigning and buying votes and we have this evidence.”

Shots were reportedly fired at a polling station on Monday, and seven people were killed in attacks last week that were said to be politically motivated.

The shooting incident at a polling station in the St. Andrews district in Kingston, had resulted in a suspension of voting for two hours.

The PNP have accused the JLP of carrying out the shooting.

No casualties were reported and voting resumed later in the afternoon after authorities deployed troops to the area, officials had said.

The former British colony has a population of some 2.7 million with an estimated per capita income of around $3,400. 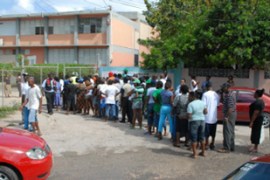