He wore a Manchester United football shirt and had only two front teeth. He was 72 years of age and said his name was Ny and a former teacher.

“Soldiers?” I asked him, “Very bad” he replied and smiled – the kind of gentle smile that people in Myanmar smile.

But these are not ‘people’, not the ones who demonstrate.

According to state media they are agitators bent on destroying the country’s stability and infrastructure.

You have to take a second look to see what passes for infrastructure in Yangon.

It is a city which is decaying by the day, and the former capital of a country which is stagnating by the minute.

When you see the potholes in the road, flowing sewage, crumbling buildings, rubbish strewn streets, you have to think hard to imagine that Rangoon – as it was called years ago –  was ever considered a nice city.

“It was nice when the British were here” said a man with greying hair.

“Frightfully nice, actually. I think most people if you asked them would prefer Britain to the generals. No contest really.”

He said good day to me and disappeared into the crowd.

Now Yangon is subject to a military stranglehold, troops on every corner in the city centre, rapid response units waiting to react to any trouble.

The monks who led the protests are gone.

Reports suggest that more than 2,000 have been arrested and are being held along with hundreds of intellectuals and activists.

But the protests, while diminishing have not disappeared.

A few hundred braved the bullets and the batons on Saturday, carrying placards calling for the release of the monks.

Those calls were heard by an army now reviled by the people.

At least nine were arrested and made to crouch down while their documentation was checked before they were frog marched away, no one knows where to.

There have been scores of arrests in the last few days, not everyone has been released.

Ibrahim Gambari, the UN’s envoy, arrived in the country on Saturday but people on the streets are not optimistic he will achieve anything.

Everyone here knows that it is China and India who hold the key.

The outside world continues to condemn Myanmar’s military clampdown.

The military here continues to shoot and beat its citizens.

What is developing on the streets of Yangon is a drama being played out for real on a daily basis and the people have front row seats.

At the hint of trouble they rush to their windows and balconies to watch as their countrymen and women are shot at, beaten and arrested.

The army look for foreigners with cameras and it is difficult to record what is happening.

The civilians, mindful of repercussions, are hesitant to allow you into their homes to film what is happening. Some defiant, some cowed.

On the outskirts of the city I drove past the lines of trucks filled with soldiers waiting to carry out any mission their commanders ordered.

Mr Ny did not seem too perturbed by the presence and actions of the troops.

He did say he was disenchanted and that he wanted the military to go.

And he certainly wanted democracy. 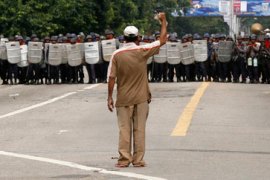 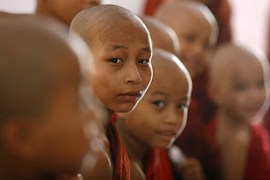