He won 379 of 494 votes cast at the meeting, beating other candidates including Mikhail Kasyanov, the former prime minister, and Viktor Gerashchenko, a former central bank chief.
Opponents detained
The Other Russia coalition, comprised of a variety of small groups opposed to Putin, has been targeted by the authorities with some of members detained during protests.
The group also chose Kasparov to be one of three candidates to head the coalitions list in parliamentary elections in December.
The coalition, however, has virtually no chance of participating in the election for the State Duma, the lower house of parliament.
Only registered political parties can take part, and none of the political movements that make up the Other Russia qualify.
According a recent opinion poll, only about three per cent of Russians say they will vote for the Other Russia.
Source : News Agencies 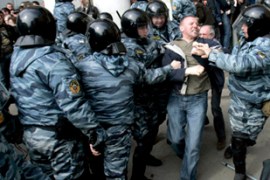 Protesters beaten by police during second day of opposition rallies. 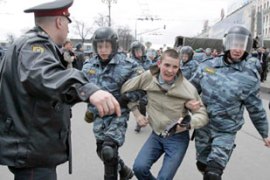 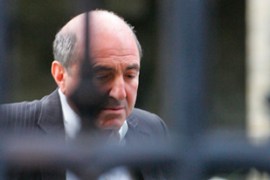