The fighting has been Lebanon’s worst internal violence since the 1975-1990 civil war, with more than 300 people killed.

In a televised speech to the country on Sunday, Siniora said: “It is the greatest national victory for Lebanon over the terrorists in Nahr al-Bared.

“It is a great success that the Lebanese army has achieved over the terrorists, those who sought chaos, destruction and tragedies for Lebanon.”

Siniora repeated a promise to the thousands of Palestinian refugees who have fled the camp in the early days of the fighting to rebuild the devastated area.

But he said that the camp would be placed under the authority of the state and “only the Lebanese state”.
At present, all Palestinian camps in Lebanon are forbidden from being accessed by Lebanese state forces under a decades-old Arab agreement.
Camp damaged
The Nahr al-Bared refugee camp was severely damaged in fifteen weeks of fighting between the Lebanese army and Fatah al-Islam.
Ahmad Abu al-Ghait, Egypt’s foreign minister, said the defeat of Fatah al-Islam was an important step towards stability in Lebanon.
He said in a statement that “it is very important for the Lebanese state to impose order and stability against any renegade organisations”, and noted that combating such groups “takes lots of sacrifices”.
Walid Muallem, Abu al-Ghait’s Syrian counterpart, also congratulated the Lebanese “army on winning this fight against a terrorist group which distracted the Lebanese army from their enemy, Israel”.
Al-Abssi’s fate
Ahmad Fatfat, a Lebanese minister close to Siniora, told Al Jazeera that it appeared that al-Abssi had been killed in the siege.
He said: “Information that reached me about one and a half hours ago  (around 1830 GMT) confirms up to 90 per cent that several witnesses identified the body of Mr Shaker al-Abssi at the government hospital in Tripoli.
“But further confirmations are required, additional witnesses have been called, and DNA tests are being carried out in order to have a definite confirmation before an official statement is issued.”
Asked how long these procedures would take, Fatfat said: “If witnesses are unanimous, I think DNA [tests] would become secondary, especially since Abssi’s wife is on hand. But if a DNA test is needed, that takes around two days.”
Cheering crowds

Crowds gathered on the streets on Sunday afternoon with the news that the fighting had ended, while troops around the refugee camp fired celebratory shots into the air.

A senior security source said: “Most of the terrorists were killed today, the others have been captured. A few might have escaped, but the army is hunting them down.” 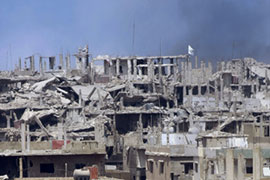 The refugee camp was all but
destroyed in the fighting [AFP]

According to the army, Fatah al-Islam fighters attacked their positions while trying to escape the camp in northern Lebanon early on Sunday.

Zeina Khodr, Al Jazeera’s correspondent in Lebanon, quoted some sources as saying that “fighters wearing army uniform launched an attack and maybe diverted the army [during which time] the leadership managed to escape”.

In all, more than 130 Fatah al-Islam fighters and 42 civilians have died in the Nahr al-Bared clashes.

On the government side, five soldiers were killed on Sunday, raising the army’s death toll to 157.

Sunday’s clashes were sparked when fighters from outside the camp drove up to an army checkpoint on the eastern edge of the camp and fired at soldiers, along with fighters inside, an army source said.

Fighters also attacked another checkpoint at the southern edge of the camp.

Khodr said that the checkpoints were stationed every 10 to 12 kilometres along the Beirut-Tripoli highway.

A security source said the army was concentrating its search in Ayun al-Samak, a village about 5km east of Nahr al-Bared. 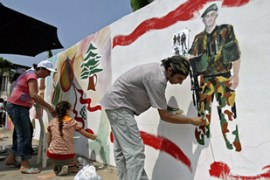 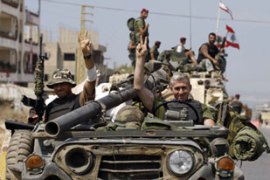 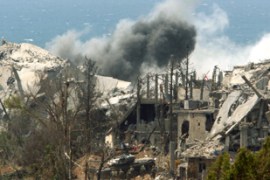 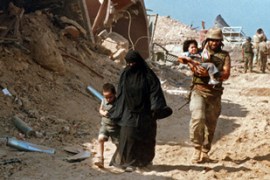