Since regaining the Western Sahara from Spanish occupation in 1975, Morocco’s sovereignty over this desert region has been challenged by the Polisario Front, an Algeria-backed separatist movement.

International efforts to assist the two parties to work out an agreed political settlement have so far failed, though the two sides are currently engaged in direct talks under UN auspices.

The sides remain divided, after two rounds of talks, but have agreed to meet for a third time.

The venue and date of that meeting have yet to be decided.

Morocco wants the talks to concentrate on the details of how to grant the region an autonomy that would enable the indigenous Sahrawi people to run their own affairs through various representative legislative, executive and judicial bodies under Moroccan sovereignty.

But the Polisario say the negotiation need to examine how to hold a referendum in which the Sahrawis would be offered a choice between independence, autonomy or integration into Morocco.

Al Jazeera met Bachir Dkhil, one of the founder members of the Polisario Front.

Imprisoned in Algeria in 1975 for his political ideas, he went on to represent the Polisario Front in Barcelona and in Geneva, before defecting to Morocco in 1992.

Today he lives in Morocco where he runs a non-governmental rights group.

Our armed struggle was against Spanish rule, which was trying to deprive us of our Arab and Islamic identity.

The Polisario was an offshoot of another movement Harakat Tahrir [Liberation Movement] that earlier took place in the northern Moroccan provinces against Spanish and French occupations.

At the time there was no such territory named as Western Sahara and the aim was not separation from Morocco but to get rid of the Spanish occupation. The former Spanish colony was retrieved by Morocco in 1975 under a three-party agreement signed between Spain, Morocco and Mauritania in Madrid.

Why did you defect from Polisario to Morocco?

I was imprisoned in 1975 for refusing to be monopolised and controlled by the government of Algeria.

After 26 [years] of struggle, I decided to return to Morocco to clear myself from human-rights violations committed against our Sahrawi people at Tindouf refugee camps in south-west Algeria and to free myself from the control of the Algerian government.

The current Polisario leaders are abusers of power and communist-like authoritarians.

Now there are 650 NGOs in the city of Laayoun, the biggest Sahrawi city in Morocco, while there is none in the refugee camps in Tindouf. This is how Polisario leaders are preaching democracy.

At least in Morocco I can express my opinion without being thrown into jail.

What is the role of Algeria in the dispute?

In 1975 Algeria got engaged in the conflict due to geopolitical differences with Morocco that date back to the Cold War. Algeria was part of the communist bloc, which tried to export the ideology to Morocco.

It provided the front with military, financial and diplomatic support to mislead international public opinion, to achieve its hegemony in the region and to serve its geo-strategic interests.

Algiers controlled the front and imposed Polisario members who shared its vision while disregarding the others.

Algeria is the real key player in the dispute and the current leaders of the Polisario Front get their orders from Algiers.

What, in your opinion, is the solution to this dispute?

Morocco is currently offering a plan to grant Western Sahara a large ammount of autonomy under its sovereignty, which will allow Sahrawis to manage their affairs within the framework of the kingdom’s territorial integrity.

The Polisario leaders have rejected the initiative. I think they have committed a big mistake – the initiative is an idea that can be discussed and can lead to an acceptable solution to all parties.

The Polisario Front does not represent the opinion of all Sahrawi people. It represents only itself. Many other Sahrawi people see the autonomy plan as an acceptable solution.

In fact, the whole world is getting united nowadays. Take the European Union as an example.

I do not see any difference between being Moroccan, Algerian or Sahrawi. The people of the region share a lot in common and should be united and integrated in the big Maghreb Union. 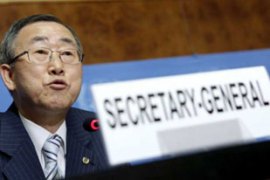