China will also resume providing data for the United Nations Register of Conventional Arms, which details imports and exports of seven categories of conventional arms.
The move comes days after Japan’s defence minister pressed his Chinese counterpart for more transparency.
US distraction
The US has also questioned the pace and amount of China’s defence spending and but Richard Armitage, the former US deputy secretary of state, said the US president was so distracted by Iraq he was neglecting Asia and allowing China to take a greater leadership role in the region.

Bush is due to arrive in Sydney on Tuesday for the Asia Pacific Economic Co-operation summit, but is to leave a day early to return to Washington to prepare for a critical Iraq progress report.
Patricia Lewis, director of the Geneva-based UN Institute for Disarmament Research, welcomed China’s announcement.
“We’re very pleased that China has taken this step,” Lewis said, adding that the UN would like all the other countries that export a large number of arms to make similar moves.
“Some transparency is really useful,” she said. “If states provide some transparency and others provide full transparency, quite often you can cross-correlate and fill in the gaps.”
Robert Karniol, a military analyst in Thailand, said the announcement was “a significant step in the right direction” but said it remained to be seen whether this was “phase one of a multiphase effort to be more open, or … their definitive response to these calls for greater transparency”.
Arms exports
China does not currently announce information about its arms deals but several overseas organisations track the transactions.
The Stockholm International Peace Research Institute, which tracks the volume of arms transfers but not their financial value, reported that the three largest importers of Chinese arms in 2006 were Bangladesh, Pakistan and Iran, which accounted for nearly 75 per cent of China’s arms exports.
China is also a major arms exporter to Sudan, and has faced criticism from human rights activists who say Chinese weapons have been used in attacks in the violence-wracked Darfur region.
Jiang defended China’s arms deals, saying the government has “all along taken a prudent and responsible attitude in its arms export and implemented strict controls on such exports”.
China says spending for its People’s Liberation Army, the world’s largest standing army with 2.3 million members, grew 17.8 per cent this year to about $45bn.
It was the largest annual increase in more than a decade.
The Pentagon estimates China’s actual defence spending may be much higher because the official budget does not include money for high-priced weapons systems.
Source: News Agencies 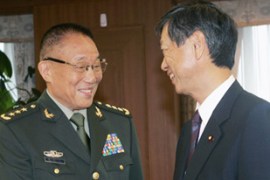 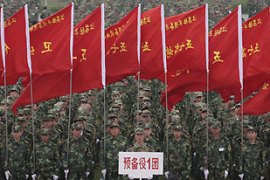