The former prime minister, however, denies the allegations.
“This is a conspiracy to tarnish the image of my family and my party,”
“We have done nothing wrong. This case against us must be lifted.”
Her political rival Sheikh Hasina, also a former prime miniter, was arrested in July and is also charged with corruption.
Sultana Kamal, a former presidential advisor, told Al Jazeera many Bangladeshis would be relieved by Khaleda’s arrest.
“Even though we have had democratic governments for the last few years the governments were not really ruling from a democratic point of view and observing democratic norms.
“With the arrest of these leaders, Bangladeshi people feel that nobody is above the law.”
Dawn raid

Witnesses said hundreds of army-led security forces moved into position around Khaleda’s home on Sunday night, before making the arrest at 07:30am (01:30 GMT).

Television coverage showed a convoy of security vehicles being deployed to transport the pair to the magistrates courts in the old section of Dhaka.

Observers said Khaleda and her son were placed in a bullet-proof vehicle, but that the roads they travelled along were empty.

The former prime minister was taken straight into court under heavy police protection; from there she was moved to a building near the Bangladeshi parliament which has been turned into a special prison.

Arafat Raham was remanded in custody for a week for further questioning by the police.

Khaleda’s eldest son, Tareque Rahman, was arrested in March, but this is the first case filed against the former leader herself by the interim government’s Anti-Corruption Commission.

The authority has already brought multiple charges of extortion and corruption against Hasina, Khaleda’s rival.

She has been held in another special prison since she was arrested on July 16, but her trial has yet to get under way.

More than 170 other senior political figures have also been detained.

Khaleda stepped down as prime minister at the end of her term in October 2006; it was the second time she had held the post since 1991.

Bangladesh has been under a state of emergency since January, and the emergency government, backed by the army, has banned all political activity and protests.

They also cancelled elections planned for January 22, but the interim leader, Fakhruddin Ahmed, a former central bank chief, has promised to hold free and fair elections before the end of 2008.

Before the state of emergency declaration, the political parties headed by Khaleda and Hasina led street protests which caused widespread unrest, and nationwide strikes which were criticised by business leaders. 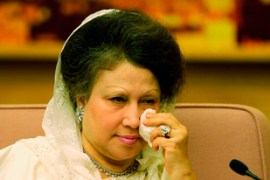 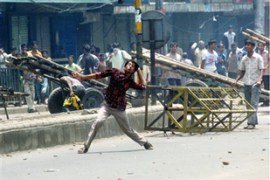 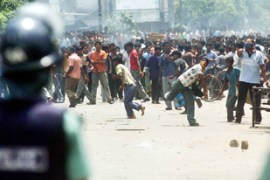