Voters on Sunday will choose between Viktor Yuschenko, the pro-western president and his ally Yulia Tymoshenko or the prime minister, Viktor Yanukovych who favours closer ties with Moscow.

The streets of the capital Kiev were awash with the blue flags of Yanukovych’s Regions Party, the orange of Yushenko’s Our Ukraine group and the white of Bloc Yulia Tymoshenko.

Yanukovych appeared to hold a slight lead in polls which prompted his two main opponents to unite their forces.

But experts predict the electorate will split their votes meaning it will be difficult for either group to achieve a majority.

Yanukovych’s Party of Regions, which draws its support from the mainly Russian-speaking east and south, appears likely to get the most votes, giving him a strong chance of remaining prime minister.

But Tymoshenko, a former prime minister and a key player in the “Orange Revolution” of 2004 that brought Yushenko to power, is also a likely candidate for the prime minister’s job.

Voters in the Yanukovych strongholds of the industrial east are anxious to maintain the country’s traditional ties to Russia.

Tymoshenko’s and Yushchenko’s parties are more popular in central and western regions, where nationalist feelings run higher and voters hope to expand ties with the European Union.

Bloc Yulia Tymoshenko is expected to come in second, trailed by the pro-Yushchenko Our Ukraine-People’s Self-defense group.

About 10,000 people attended an extravagant Yanukovych rally on Friday where the prime minister warned Yushchenko and Tymoshenko would bring nationalist turmoil, whereas he was the candidate of prosperity and stability.

“Instead of jobs they would create artificial crises,” he said.

Nearby, Tymoshenko addressed about 3,000 supporters, many holding candles.

She acknowledged that the 2004 pro-democracy “Orange Revolution” had not delivered on its promises of defeating corruption and integrating with the West.

“I bow my head low and ask for forgiveness before God and the  people,” she said.

Yushchenko, meanwhile, took part in a television debate, during which he praised Ukrainian democracy.

“We can elect who we want. Before there was a time when we didn’t have that,” he said.

Because no party is likely to win a clear majority, complex coalition talks with the possibility of legal challenges and street demonstrations over the results seem inevitable.

Yushchenko currently shares power with his bitter rival Yanukovych, a fraught alliance that has led to political wrangling and constitutional paralysis, leading to the decision to hold snap parliamentary elections.

There are fears of violent demostrations and court battles should the election prompt complaints of vote-rigging.

A report on Friday by the European Network of Election Monitoring Organisations expressed concerns over voter registration and voting lists which “might lead to cases of multiple voting and  ballot stuffing.”

Although the election will be closely watched in Washington, Moscow and many parts of Europe many Ukrainians are turned off by seemingly endless political bickering.

Jonah Hull, Al Jazeera’s correspondent in Kiev, says most Ukrainians simply want a functioning, stable government, something they have not had in a long time. 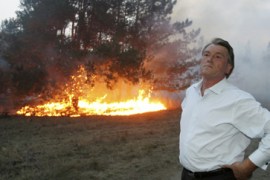 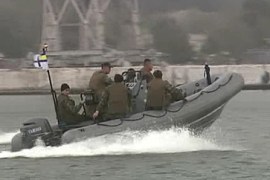 A region that epitomises Ukraine’s sharp division between east and west.