Activists, analysts and observers inside Myanamar speak to Al Jazeera about the rising violence, continued demonstrations and potential international response to the crisis in the country:

“It’s very clear that the Burmese people are no longer afraid of the Burmese military. The violence and killing of buddhist monks have taken away their fear of confrontation … and we will continue to see more demonstrations in the days ahead.

“There is a real chance for change. That is why people are sacrificing their lives. They know the danger they are in, it’s grave, they know that [but] they are out there challenging the military. They wouldn’t do that if they didn’t believe there wasn’t a chance of change.

“Countries like America should abandon the UN Security Council and go along with the Chinese. We need immediate tripartite dialogue between the US, the Chinese and the Burmese military.

“Or a call for the monks within Burma to talk to the generals to stop the mayhem. Another possibility is the UK, US, Asean and even China, should start sending their senior envoys to try to talk to the military.

“If the Chinese do not help the Burmese, the anger on the street could turn on the Chinese. There is already anti-Chinese sentiment in the country because the Chinese have supported the Burmese military over the past 19 years vehemently.

“The [Burmese] deputy foreign minister stated that the government policy was to show restraint in response to the ‘provocation’, so clearly they say there is a policy of graduated response in Yangon, but occurances in Yangon may suggest this is not necessarily the case.

“A transformation and an escalation has led us to this point. We’ve been concerned over the last few years that there has been growing impovrishment.

“The sudden price increases on fuel and natural gas shocked a significant proportion of the population … and they couldn’t accomodate it.”

“Burmese people have been living under fear. But now they have greater anger than fear. They have overcome the fear.

“We expected this repressive military regime to respond in this way … but the only thing we are upset about is that the international community cannot respond more quickly. This is costing more Burmese lives.”

Myo Thein, Burma Campaign at a demonstration outside the Burmese embassy in London:

“This is an uprising now. The military started firing on the peaceful demonstrations. Hundreds of people have been arrested, so this a very important crucial time.

“People outside Burma are now showing their support … We need political and economic pressure and see if we can find a solution. We have to wait and see.” 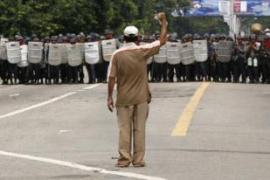 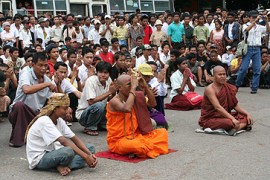 Can the protests bring change to Myanmar? What can the international community do? 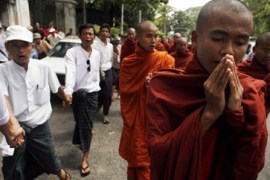 A Buddhist monk in Myanmar tells Al Jazeera of the protesters’ demands. 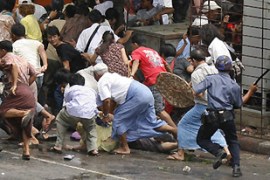 Protesters warned they risk being shot as police move to clear Yangon streets.