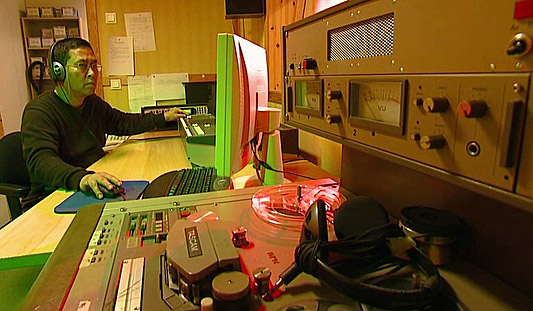 As the strongest show of dissent in nearly 20 years unfolds in Myanmar, people inside and outside of the country are more desperate than ever for reliable information on what is happening there.

With the military government’s tight control on reporting, many listen avidly to overseas broadcasters – effectively Myanmar‘s media in exile, operating from several countries in Asia and Europe.

One of the most influential is the Democratic Voice of Burma (DVB), run by a small group of journalists based in Oslo, Norway.

The founders of DVB and most of the team members are dissidents who fled Myanmar‘s military rule almost two decades ago.

These are busy times at DVB, with undercover reporters ringing in from home and listeners calling from all over the world to offer or ask for the latest information on the increasingly tense situation in Myanmar.

Aye Chan Naing, the editor who oversees DVB’s operations, was a student leader during the 1988 protests that were brutally crushed by the military.

He knows his reporters on the ground are taking enormous risks.

“They of course all are undercover,” he told Al Jazeera.

“They are now hiding in different places… they don’t sleep in their home. “When the demonstrators come out in the day time, they all come out and film or report back to us.”

As the situation in Myanmar turns critical, the journalists at DVB have stepped up their output, adding extra hours to regular programming to meet the increasing demand for news.

They have gone from two hours of radio broadcasts a day to nine, and they are broadcasting more television using videotapes smuggled out of Myanmar.

Besides reporting on current affairs from the inside, DVB also works on feature stories such as the growth of gambling amongst children in Myanmar, a sensitive issue for the military government.

Given their wide reach, DVB has been receiving a lot of pictures of the ongoing demonstrations from a wide range of sources.

These pictures are watched by an eager audience in Myanmar and many are picked up and rebroadcast by international news organisations.

Aye Chan Naing says it what is unfolding that could prove to be a defining moment for the country.

“Right now I think it’s a critical situation. It could lead to the fall of the military regime in Burma, or it could lead to a major bloodshed in Burma.“

Although the team claims the objective was not to help overthrow the military government, their support for opposition leader Aung San Suu Kyi, currently under house arrest, is obvious.

Ultimately, their dream is to broadcast from Myanmar, which also means they can end their exile and return home.