Ron Gettelfinger, president of the union, said production at GM facilities would resume on Wednesday, two days after the first national UAW strike at GM since 1970.
Buoyant GM
Speaking at a news conference at the union’s Detroit headquarters, Gettelfinger said the UAW expected to meet on Thursday or Friday with local unit presidents to go over details of the four-year agreement to allow for local ratification meetings over the weekend.

“We feel very confident it will be ratified,” Gettelfinger said.
GM said the national agreement “paves the way for GM to significantly improve its manufacturing competitiveness” and maintain a strong production presence in the United States.
“There’s no question this was one of the most complex and difficult bargaining sessions in the history of the GM-UAW relationship,” Rick Wagoner, GM’s chief executive, said in a statement.
Gettelfinger led the UAW out on strike on Monday, saying that the automaker had not met the union’s demands for guarantees of job security.
“I think our retirees will be exceptionally pleased with this contract and for our active membership, there will be some changes, but overall they will be very, very pleased with the outcome of this negotiation and the job security that is associated with this,” he said.
Falling market share
Struggling GM posted a combined loss of $12.3bn over the past two years and has seen its US market share drop to about 24 per cent in 2006 from about 46 percent in 1978. It needs cuts in healthcare costs and other areas to compete.
Neither GM, nor the UAW officials elaborated on the details of the healthcare trust. However, Gettelfinger told reporters the union expected the trust to provide steady funding for 80 years, based on cash flow and solvency projections.
The new UAW-aligned trust, known as the Voluntary Employee Beneficiary Association, or VEBA, must receive court approval, and GM said the US Securities and Exchange Commission would conduct a review of its accounting treatment as well.
Source: News Agencies 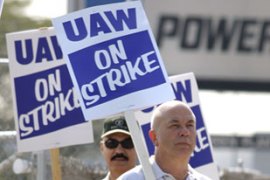