Made an outcast by much of the Western world for its human rights record, Myanmar has been under international sanctions for almost two decades.

For ordinary people, hardship has become a fact of daily life.

But Myanmar’s economy has continued to run in part because of help from China.

Hungry for energy to fuel its booming economy, China has been snapping-up natural gas from its resource-rich neighbour.

In return Beijing has become an important aid donor and a provider of arms to Myanmar’s ruling military junta.

But as tensions mount in Yangon and around Myanmar, the country with the greatest influence over this military regime has been conspicuously silent.

When Chinese officials did finally speak out on Tuesday, it was to announce that Beijing was taking a back seat in the matter.

“As a neighbour of Myanmar, we hope to see the situation stabilise and for the economic development of Myanmar.”

Non-interference in another state’s affairs has long been Beijing’s foreign policy mantra – in part reflecting how Beijing would like the rest of the world not to interfere in its own affairs.

Given China’s own recent history, its leaders are hardly likely to urge a neighbour to bow to street protesters demanding democracy.

But that does not mean China approves entirely of the leaders currently in charge of Myanmar.

The military regime creates enough problems as it is – according to the UN, Myanmar is one of Southeast Asia’s greatest producers of opium, and those drugs are spilling across the border into China. 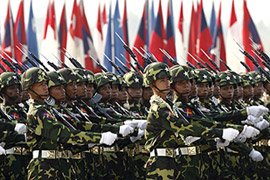 What the rest of the world hopes to see in Myanmar – a more open society, an emerging economy – is also preferable for China.

A stable neighbour is better for business.

But Beijing strongly disagrees that sanctions are the answer.

From China’s perspective it is arguable whether sanctions hurt or might actually buttress a regime.

There is also a parallel in China’s relationship with Sudan.

Under criticism for doing business with the African state – itself accused of human rights abuses – China has also proven it is the only country to have any clout over the leadership in Khartoum.

Under international pressure, China had toed a delicate diplomatic line with the Sudanese leadership, discretely.

Professor Zhang Xizhen of Peking University says it would not be out of the question for the Chinese to exert some pressure on the government of Myanmar, from behind closed doors.

“I don’t believe the Chinese government can do some open and official act to influence the Myanmar government,” Zhang told Al Jazeera.

“Maybe the Chinese government can contact Myanmar officials through some [unofficial] channels.”

China‘s public reaction to the protests may not tell the whole story.

Whilst it might not want to be seen as encouraging pro-democracy uprisings, it would not be diplomatically astute to be seen backing military action against unarmed protesters either.

One outcome Beijing does not want to see is a return to violence on the streets of Yangon.

That, at least, is one view China shares with the rest of the international community.